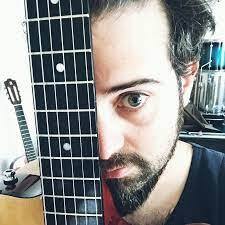 Stefano Giordani runs his own project called Connected and with it, he released our album at the prestigious Nuoro jazz festival in 2016. He collaborated with Russ Peterson (USA) and Tomasz Bura (PL).  As a sessionist in 2008,  he have been a part of a band called Hastenia and performed all around the north of Italy with them (we open an Afterhours concert and performed at the jungle studio for rock tv). In 2010 released in Villa Lagarina Jazz festival his first solo album called “l’ordine delle cose” and also performed with the Bonporti big band with a very special guest, Paolo Fresu.

In 2012 Stefano spent one year in Holland as a student but he had the opportunity to collaborate with the theatre of Tilburg for a show called “Doorbraak” and on that occasion, we performed my tunes. In that year also collaborated with the choreographer Lisa Freudenthal and performed in Stuttgart (DE).

In Uk, he collaborated with Tomasz Bura who played in his trio and played and performed with many musicians,  Izzy Thomas, Terry Smiles,  Oscar Stieler (who has played with Lalah Hathaway, Erykah Badu, Macy Gray). In the pop scene, he performed with the well-known Kurdish singer Dashni Morad.  Also, Stefano played in one of the most viewed music channels called “Sofar”. Also,  constantly performed with Smiles Collective, an R'n'B band that has played with Gloria Estaphan, & Lalah Hathaway & many more.

At the moment he is a part of a group called Euregio Collective which is a mix of Sudtirol, Trentino, Swiss and Austrian musicians. We use to perform in Sudtirol, Austria, and Switzerland.