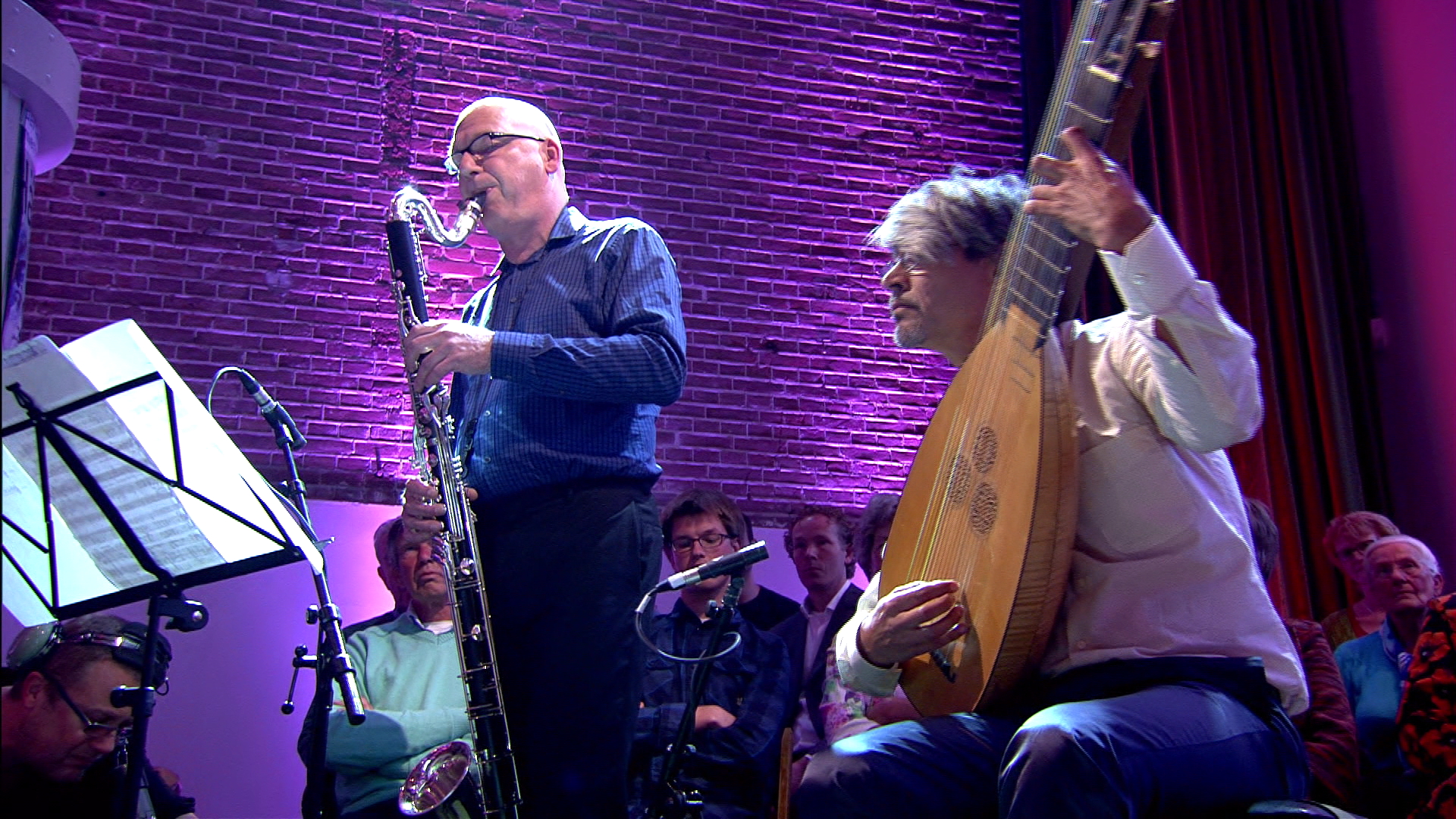 Sometimes two musical worlds converge that should not match and yet the sparks from this unexpected ‘collision’ open a door to a new musical universe. This is exactly what happened ten years ago when baroque lutenist Mike Fentross and jazz bass clarinetist Maarten Ornstein first played together.

Coming from entirely different musical backgrounds- Ornstein from jazz and Fentross from Baroque music- the unorthodox yet exquisite blend of their instruments combined was not lost to the audience or the musicians themselves, and quickly the decision was made to play again. As they played more concerts, their repertoire grew to include a wide variety of music. Compositions by 17th-century Dutch poet, diplomat, and musician Constantijn Huygens, John Dowland, Claudio Monteverdi, and Girolamo Frescobaldi as well as the Egyptian composer Sayed Darwish, Swedish folk musician Mikae Marin -to name a few- were added to the collection of music that works beautifully well in this duo. The inclusion of Arvo Pärt's magical work Spiegel im Spiegel illustrates the duo's willingness to explore any kind of music, disregarding boundaries set by style or instrumentation.

If you ever need any proof that music is truly an international language, here it is.

A Lebanese singer, a baroque musician, and a jazz musician united in their love for beautiful songs that enable and inspire them to sing and play their best. Songs from the West and from the East, both old and new. Music by Dawud Hosni, Michel Lambert, Oum Kalthoum and Constantijn Huygens go side by side, with new lyrics in Arabic fitted to 17th Century Baroque songs and innovative arrangements for classical Arabic music. With this bold artistic statement, these three musicians are setting the pace in crossing the borders between jazz, classical European, and Arabic music.

Laula! is the latest project by Mike Fentross and Maarten Ornstein; following their debut duo album ‘Oblivion Soave’ and having worked with Rima Khcheich on 'Ombre de Mon Amant', they are again collaborating with an extraordinary singer: Estonian mezzo-soprano Kadri Tegelmann. She is not only a superb interpreter of Baroque music but also introduced Maarten and Mike to the deep, rich tradition of Baltic vocal music with its folksongs, hymns, and chants. Many - if not most - Estonian folksongs are about events from the cycle of life; birth, marriage, lullabies, leaving and returning home, and death.

For each of the Estonian songs featured, they have found a thematical equivalent from the Baroque era and paired the songs where possible. Thus, for instance, the traditional Une Sulased (Servants of Slumber) is carefully woven into Tarquinio Merula’s monumental Canzonetta spirituale Sopra alla nanna. Both songs are about the darker side of sleep, dreams, and nightmares.

This project is all about life. Life, in all its joy, misery, anxiety, glory and mystery - just like music itself.

Maarten Ornstein is a Dutch musician based in Amsterdam. He plays tenor saxophone, clarinet and bass clarinet and also works as a composer and arranger.  A musician of astonishing diversity, he leads the free funk ensemble DASH! and performs as a soloist. Additionally, he plays with baroque lutist Mike Fentross, Lebanese singer Rima Khcheich, poet and singer Jeannine Valeriano. and Icelandic pianist Sunna Gunnlaugs.  Maarten Ornstein endorses Légère reeds and is a member of Splendor Amsterdam.

Both in his playing and composing, Maarten Ornstein is always looking for new challenges, people to work with, rules to break and boundaries to cross. Exploration, mastering and mixing of new genres is at the heart of his musical life, which results in a huge diversity in his musical output. Regardless of the genre, his voice on his instrument is always instantly recognisable. He combines explosive virtuosity with a strong lyrical talent and the ability to make every note count.

Conductor/lutenist Mike Fentross has largely earned his credits as an early music specialist and keeps on developing as a musician and instrumentalist. He graduated in 1988 from the Royal Conservatory The Hague where he studied with lute pioneer Toyohiko Satoh. Soon after his graduation, he was appointed as professor of basso continuo on the lute at the same institute and later he succeeded his former professor.

In 1992 he founded his ensemble La Sfera Armoniosa which later developed into both an ensemble and an orchestra. In 1994 he won the Van Wassenaer Competition in the Concertgebouw Amsterdam and 1999 he debuted as a conductor.

In 2013 he formed a fascinating duo with jazz musician and composer Maarten Ornstein. They have already recorded three very successful albums. As the great Duke Ellington once said “if it sounds good, it is good” meaning that there is no right or wrong in music.

Mike played or conducted on almost one hundred CDs. Both Cavalli operas were released on cd. La Rosinda on the label Ludi Musici and La Rosinda on Challenge Classics International.

In 2017 he recorded a Henry Purcell cd with his orchestra and soprano Johannette Zomer in the Philharmonie Essen. For this project, two copies of the trumpet of Purcell’s trumpet player John Bull were built. In 2019 and 2021 he conducted and recorded two new programs as part of a series of cd’s music by (forgotten) Dutch composers. Concerti grossi from Willem de Fesch and from Pieter Hellendaal. The release of Pieter Hellendaal cd will take place in September 2022.

In October 2022 he will record with his ensemble ‘Concerti Armonici’ from Count Unico van Wassenaer, the third cd in the series (forgotten) Dutch composers.