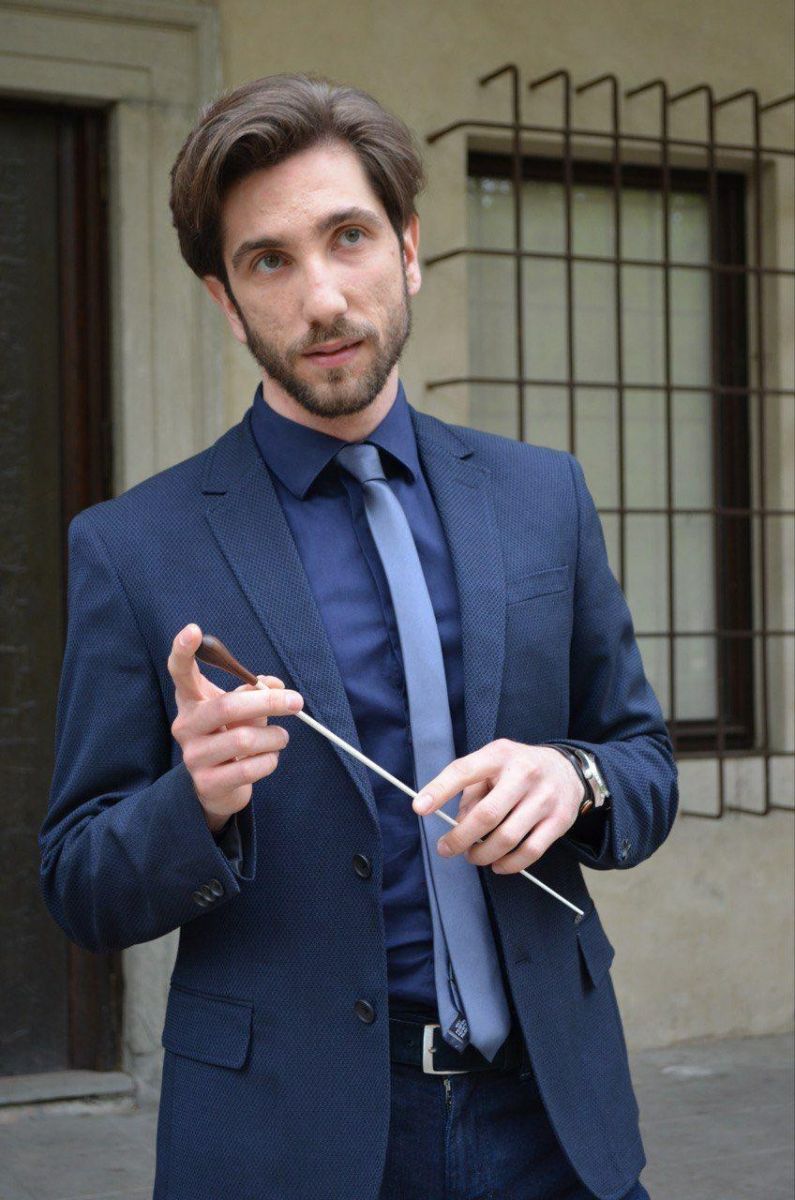 Carmelo Bongiovanni, born in 1992, begins his musical studies as a private individual at the age of 8 as a trombonist, studies that will lead him to his debut in his father's band, of which he becomes musical director.

After the first short period of studies, after the scientific maturity, he undertakes the path as a pianist, first privately, then in the conservatory, under the guidance of the masters Luca Rasca, Damyan Tudzarov and Leonardo Colafelice.

In July 2020 obtained the II level diploma in composition with full marks and honors under the guidance of Fabrizio Fanticini at the Arrigo Boito conservatory in Parma.

From 2013 began management studies with Luigi Miriello, then perfecting himself with Michele Santorsola and Marco Zuccarini.

His career as a musician began as a trombonist, at the age of 10, with his father's band, of which he later became its musical director and

preparer. At the age of 13 he became a singer of the “S. Cecilia ”, and in a short period he became organist and director. From an early age, he demonstrated outstanding qualities in the field of composition and conducting; important for his training and for the construction of an ever-growing cultural baggage, was the constant work of arrangements, transcriptions, re-orchestrations and orchestrations, of pieces of various kinds for various groups.

In 2013, he commissioned the musical  “Seven  brides  for  seven brothers” by the scientific high school “M. Guerrisi ". For this occasion, he arranged the music for a small orchestra and a choir. He composed a piece for a ballet.

In May 2016 he collaborated with the masters Fabio De Leonardis and Tiziana Di Giuseppe for the realization of a chamber music masterclass, successfully covering the role of conductor. With them he founding the

Vivaldi Chamber Orchestra and with them completed more than 20 concerts in two years, performing a repertoire between 17th and 19th centuries, which have often seen the collaboration with young soloists. In the same year, he was assistant to Mo Andrea Corazza with whom collaborated for the orchestration and concertation of pieces  with  the youth orchestra of the “F. Torrefranca".

His first collaboration with professional orchestras took place in April 2018, when he made his debut with the orchestra of the “F. Cilea "in Reggio Calabria perfromnig music by Mozart, Haydn and Vitali..

In May 2018, Mo Giuliano De Angelis invited him, an internationally renowned cellist, to participate in the first edition of the "May Festival", as a conductor. He conducting Rossini's overtures and arias most famous works from Traviata, Rigoletto, Turandot, Bohème, Tosca, collaborating with the tenor Orazio Taglialatela Scafati and the soprano Annalisa D'Agosto.

In July 2018, in collaboration with the "Euterpe" choir of Palmi (RC) and the Vivaldi Chamber Orchestra he conducted the Vesperae Solennes De Confessore k 339 by WA Mozart with the soprano Caterina Francese, the mezzo-soprano Elisa Moscato,tenor Isidoro Galdino and the bass Angelo Mazza.

In Parma, together with the harpsichordist Francesco Monica, he founded the Archè chamber orchestra and in April 2019, performs Mozart's “Eine Kleine Nachtmusik”, symphony no. 10, for strings in B minor by Mendelssohn and, with the participation of the violinist Isac Macrì, Vivaldi's “Summer” and “Winter”.

In July 2019, the second prize was awarded to his composition COLORS for symphonic orchestra, as part of the 2. August International Composition Competition, one of the most prestigious composition competitions that has taken place every year in Bologna since 1995.

In November of the same year he was appointed as  musical  artistic director of the "Corale Renata Tebaldi". In addition to his artistic activity, he works alongside that of teacher; in 2018, the position, as tutor, at the “F. Torrefranca” on Vibo Valentia, of harmony teacher.