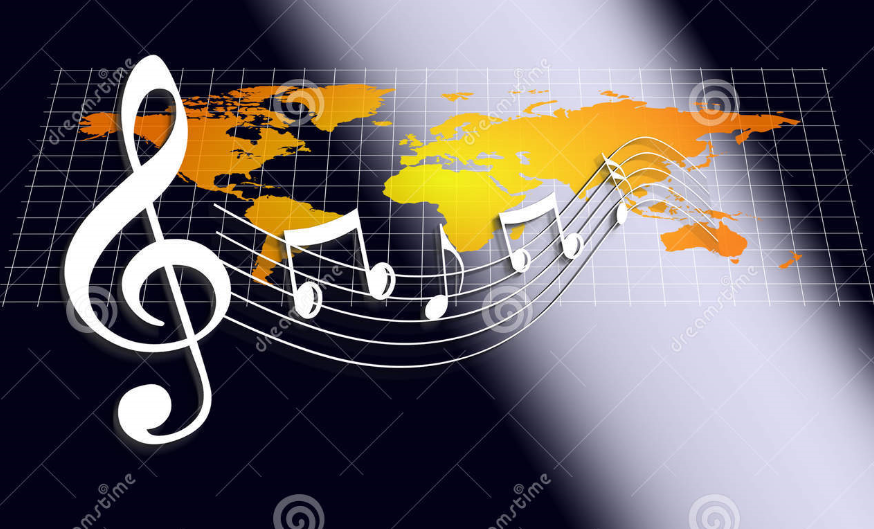 World music is a collective musical category that includes a wide variety of traditional and folk music styles from around the world, especially non-western music genres, as well as their hybrids and modern interpretations of their traditional style.

However, some folk and traditional music from western countries are also considered world music. Since the term is a collective one and includes different cultures and music, there are a variety of types of world music.

Most world music genres from around the world focus on the beat and rhythm, because they’re mainly ceremonial and encourage people to dance or move.

However, Chinese music’s principal design focuses more on producing a calming effect on the listener and enhancing their productivity rather than being ceremonial.

Chinese folk music is mainly the Han people’s music, which is most notably known for the exotic and unique set of instruments used to play it.

Most of the instruments in tradincludeChinese music include:

Traditional Music in Central America and the Caribbean

Central American countries include Mexico and Puerto Rico as well as several other countries that have some popular music genres, such as Costa Rica, Cuba, Honduras, Guatemala, and Caribbean countries like Jamaica.

Hispanic countries’ music themes are more related to the Latin music styles as well as their indigenous people’s music. There is also the traditional mariachi music that dates back to the 1700s.

On the other hand, traditional Caribbean music is known for its melodic mix of European and African music styles.

The most commonly used instruments in traditional Central American music are percussion and string instruments, mainly drums and guitars respectively.

The most popular music genres of the region are:

India is a huge chunk of Asia and is home to the second-largest population in the world. Traditional music in India is categorized mainly into classical and folk music.

There is also film music, which contains a variety of pop and folk as well as modernized western music.

Immigration also had a major influence on world music because it provided a wide range of options for public listeners.

For example, Punjabi music became a huge trend in the UK In the late ’70s because of the growing Punjabi population in these countries.

Similarly, the popular Indian Bhangra music also had a strong representation around the world thanks to the Indian population in New York and Chicago.

However, many of these Indian world music genres were popularized in western cultures through collaboration in songs, especially rap, which gained them more mainstream integration by non-Indian listeners.

The southwestern region of Asia is mostly occupied by oriental nations, such as Iran, Turkey, and Arab countries.

Most of the traditional music in these regions is quite similar in that they all put a powerful emphasis on melody and rhythm rather than harmony.

Traditional and some modernized oriental music will usually include polyphonic music and use specific instruments, such as oud and qanun.

Additionally, Tarab is one of the most popular world music genres that came from these regions, especially in Arab countries.

Most of the popularity of world music genres in Arab countries comes from ”Mawazine”, which is a popular world music festival that is hosted by Morocco every year.

Africa is the oldest inhabited continent in the world. The “Mother Continent” encompasses a huge variety of unique musical styles that originates in many African regions.

Not only that, but some of these world musical styles have also influenced some of the most popular music genres around the world today!

North African traditional music is typically unique and different from the music in central and South Africa.

North African countries are mostly Arab and Mediterranean countries, so their music is more influenced by their ethnic background and common language than their geographical position.

While pop music is by far the most common music genre in the majority of North African countries, there are some notable world music genres in the region.

France, Rai music, which is one of the most popular genres of folk music in Algeria, Morocco, and Tunis.

Rai music also has an international fanbase with a decent presence in France, Belgium, and other Arab countries.

Southern Egypt and the Nubian regions also have unique forms of folk music, such as Rababah, which is ballad-based music that is a usually single thread special single-thread instrument.

Similar to the north, music in the south is also going strong in Africa. In the majority of cases, African music is known for its highly energetic and fast-paced style.

Since these music genres are usually played in ceremonies and celebrations, it’s usually accompanied by a dance, which usually holds the same name.

Although the music from North America and Europe aren’t typically categorized as “world music” genres, these regions still have some notable types of world music, which are mostly tribal.

Native tribes, such as Navajo and Innu, are known for featuring simple musical instruments, such as drums, and rattles, which are usually accompanied by singing and humming.

Similar to North America, Europe also has some forms of world music genres, which are commonly known as “western world music” or “contemporary folk music”.

Every country has its unique music genres and styles. However, due to geographical reasons and shared history, many regions in Europe also share similar tastes in music, which is why you can classify music in Europe based on geography.

Tons of folk music characterizes each country, such as:

South America is popular for many things. However, South American traditional music is easily one of the most distinguishable in the world!

The traditional music in this region is known for carrying energetic vibes and rhythmic upbeat melodies that are extremely catchy and appeal to all ages, making them among the most popular types of world music genres.

What characterizes these genres is that they’re usually dance-based music that is inspired by the European occupation of the continent in the last few centuries and combined with the tribal music from the native population.

Additionally, it incorporates some elements from the African music that came with the enslaved African ancestors that the Europeans transported from West and Central Africa to the Americas.

Moreover, South American world music genres are also influenced by tribal ballads and music from indigenous people in the region. Here are some of the most common genres in the continent:

Cumbia (mainly Colombia, but also enjoyed all over the continent)

During the late 1900s, many musical styles in the region were influenced by western music, particularly from the U.S.

This gave rise to many subgenres in the region that are extremely popular and successful today, including hip hop, jazz, rock, R&B, and pop.

In addition to all the traditional music that encompasses world music, there’s also the “hybrid world music”.

This type of world music was coined because the music industry needed a new term that describes the new blends of ethnic and traditional music from various cultures together.

Hybrid world music is represented through some of the music genres that are mainly a fusion of different cultures as well as different interpretations of traditional music styles.

One of the most popular representatives of this type of world music is Worldbeat, Irish-West African, and Afro-Celt Sound System.

Worldbeat also goes by different names and subgenres that all lead to the same concept, such as World Fusion and Global Fusion.