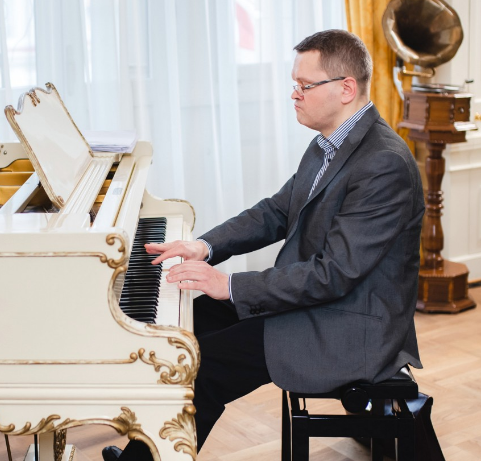 Wojciech Majewski is one of the most outstanding Polish pianists. He is a virtuoso performing both jazz and classical music. In addition, he became known as an interesting, original composer.

In 2015, the album “Wojciech Majewski plays Scriabin” was released. One of his first listeners was Nigel Kennedy, who in the text in the booklet called Majewski  “the greatest Polish pianist of our time”. As with his previous albums, Mr. Majewski proves himself to be a poet of the piano, whose technique goes wherever his sensitivity and imagination take him.

Wojciech Majewski graduated from the Warsaw Academy of Music. F. Chopin in the piano class. In 2001, he released the first album he wrote, “Grechuta”, containing jazz interpretations of the Polish singer’s composition. The album was met with an enthusiastic reception from the critics, the public, as well as the artistic milieu. The artist’s second album, titled “Zamyślenie” (“Meditation”), was released in 2003. The album was dominated by the original compositions of the leader, the album received the As Empik 2003 bestselling award in the Polish Jazz category. The first two albums of the artist, as well as the third completely authorial position ‘Opowieść’ (“The Tale”) 2009, were noticed by the music industry, which was expressed by 5 nominations for the Fryderyk Award in the categories: jazz album of the year and jazz musician of the year.

In the fall of 2006, the bestseller book by Majewski was published by Znak, entitled “Marek Grechuta – Portrait of the artist”.

In 2008, the artist composed a “Suite for cello, piano and string orchestra”, performed jointly with Andrzej Bauer and the orchestra “Aukso” under the baton of Marek Mos. In 2014, the pianist took part in the “Jan Karski Year” with great success performing “Henryk Wars’ Piano Concerto” with the accompaniment of the Polish Radio Orchestra.

In 2015, the album “Wojciech Majewski plays Skryabin” was released. One of his first listeners was Nigel Kennedy, who in the text in the booklet called Majewski “the greatest Polish pianist of our time”. In 2016, the Sony Music label resumed the album “Grechuta” enriching the original material with additional recordings. The reedition coincided with the fifteenth anniversary of the release of the album. The publishing house has collected great press reviews and has been featured on Empik’s list of bestsellers.

In 2016, the pianist took part in the recording of the album “Tribute to Henryk Majewski”, which in 2017 received the Fryderyk award in the category of “jazz album of the year”.

In autumn 2017, the next album of the artist was released, “There was no summer“.

Majewski performed with many outstanding artists such as: Tomasz Szukalski, Jan Ptaszyn Wróblewski, Zbigniew Namysłowski, Joe La Barbera, Henryk Miśkiewicz, Palle Danielsson, Andrzej Bauer, Stanisław Soyka, Ewa Bem, Wiesław Komasa and others. He made many radio, television, and recordings. He has performed in Germany, Israel, the USA, France, Russia, and Italy. He has performed at prestigious festivals such as Jazz Jamboree, Jazz nad Odrą, Singer’s Warsaw, or Jazz Open in Stuttgart. The performance on the latter was released on the DVD – “Best of Jazz Open 1998”.

Since 2003 Wojciech Majewski has taught in the Jazz Department of F. Chopin Music School Complex in Warsaw.