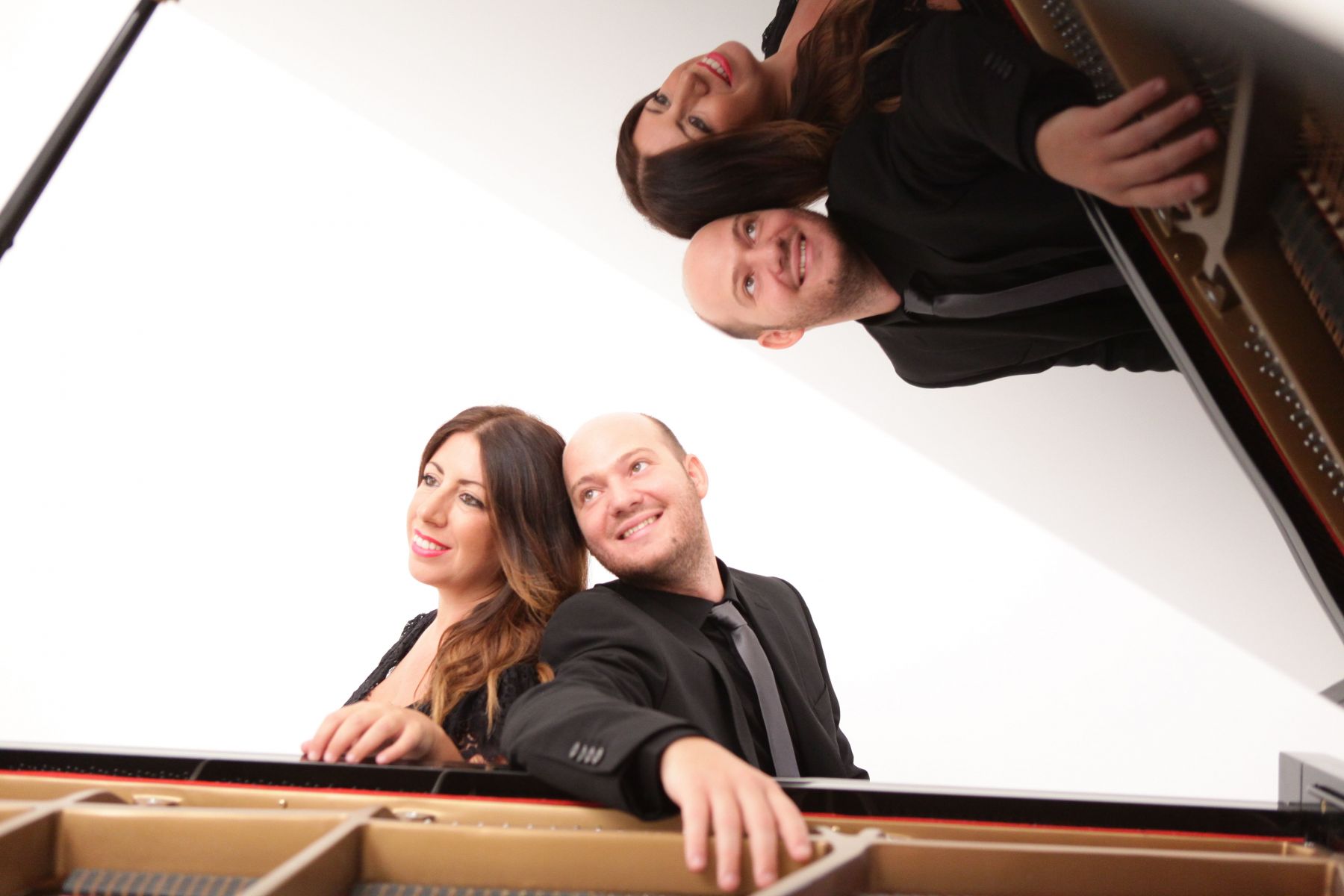 The piano duo formed by Lucia Veneziani and Davide Valluzzi, after having achieved the Second Level Degree in piano at the N. Piccinni Conservatory of Bari with full marks, respectively with the masters Gregorio Goffredo and Maurizio Matarrese, made their debut in 2014 , in the thriving artistic and cultural environment of the city of Oulu, Finland, where following the award of a prestigious scholarship from the European Community, they had the opportunity to collaborate side by side in an intense professional activity that saw them protagonists of various concerts both solo and chamber, in formation with some of the most talented instrumentalists of the place, enjoying great success and consent of the public. They immediately discovered that they could combine their musical talents in an extremely natural way, working on a varied and stimulating repertoire, ranging from classical authors such as Mendelssohn, Mozart, Poulenc, Saint-Saens, to more modern authors, also resulting in the modern and jazz music, such as Mike Cornick, Ligeti, Lutoslawski, Gershwin, Piazzolla, also focusing on little-known pieces of great musical artistic value.

The duo has the opportunity to perform immediately in the most prestigious halls of Oulu, such as the Tulindberg hall and the Concert Hall of the OUAS University, finding a wide consensus of a cultured public, striking above all for their harmony and for their musical artistic talents and personalities. perfectly balanced.

They also recently performed for the Philharmonic Academy of Bologna at the Mozart hall, later for the Ravello Concert Society, for the Humanitarian Society of Milan, for “Bolivar” Theatre of Naples, for the Ass. Beatrice Houck of Riva San Vitale, for the "Antithetis" Cultural Music Association of Acquiterme, for the Ass. Musical "Friends of Music" of Udine, for the Ass. Amadeus di Casamassima (BA), Ass. Ars Nova di Cerignola (FG) for the Camerata Barese (with the performance of Beethoven's Symphonies n. 3 and n. 4 transcribed by Ulrich for 4 hands), always obtaining excellent reviews .

From 2015 to 2017 the duo attended the Higher Piano Specialization course held by Maestro Bruno Canino, at the Academy of Fiesole, and passed the final exam with full marks. Currently the duo continues its intense concert activity, expanding its repertoire and developing an increasingly effective and refined musicality and complicity.

They wrote about them: "[...] Yet a precision and a sharpness even for engraving, of those that are no longer done [...] our duo has shown that they arecapable of all colors, both in strong and sudden

contrasts both in the softest shades. […] From every corner of the Foyer of the Teatro Nuovo, everyone had the opportunity to experience with their eyes the brave technique of the two young people from Bari, the same appreciated by the ears, but visually manifested by the spectacle of the very fast hands. [...] The duo combines in a perfect artistic fusion, coherent, together, never contradictory, a complete understanding in making the complex texture of an orchestral sound, dense, compact, total. " - P. Tortora, Mirandola Classica – Reviews