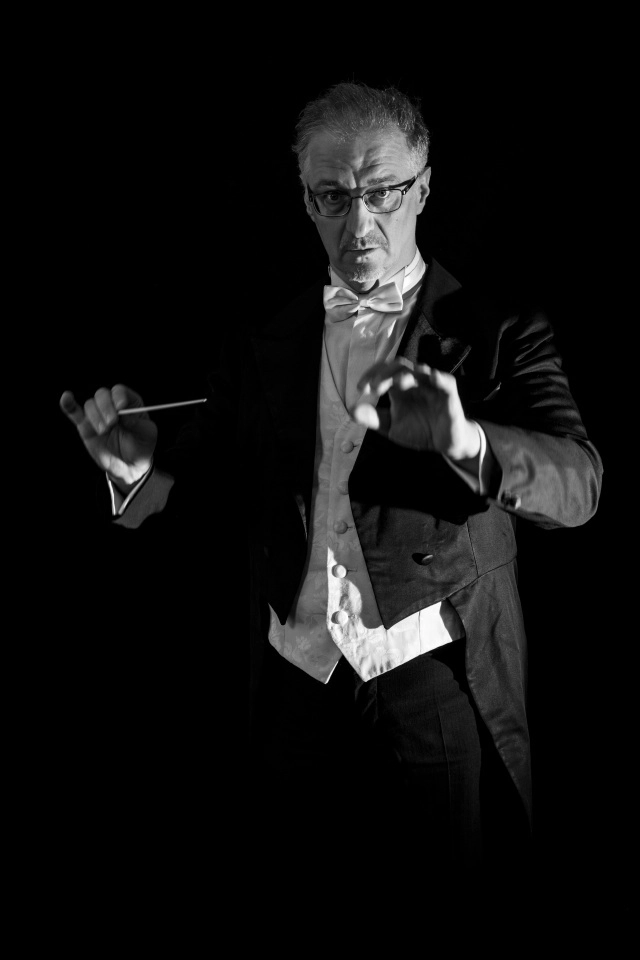 Born in Modena in 1970, he got his Composition Diploma at Modena Conservatory in 1997 and his Conducting Diploma in Bologna Conservatory in 1999. Teachers: Giancarlo Andretta, Cristina Landuzzi, Maurizio Ferrari, Paolo Arrivabeni, G. Indulti, G. Petrassi, A. Solbiati, A. Guarneri, F. Donatoni, E. Morricone, C. F. Cillario. Since 2013 Maestro Seghedoni teaches in the conservatories of Reggio Emilia and Modena.

In the same year, he made his debut at the “Festival dei Presidi di Orbetello” in Tuscany, conducting Rigoletto, Traviata and Il Trovatore by G. Verdi.

In 2003 Maestro Seghedoni made his debut during the 2003-04 opera season of Modena Town Hall Theatre “Luciano Pavarotti”, conducting the world premiere of “La Famosa invasione degli orsi in Sicilia” by Marco Biscarini; thereafter he performed Verdi’s “Nabucco” and Britten’s “The little sweep”. In 2005 he was invited by “Festival delle Nazioni” (Perugia), to conduct the Italian premiere of Szymanowski’s “La Mandragora” in a new production by Michael Zaniecki.

In January 2013 Maestro Seghedoni conducted Pergolesi’s “La Morte di San Giuseppe” with the “Franz Liszt Chamber Orchestra” of Budapest, at the concert hall of the Italian Institute of culture and, in the same month, he performed Beethoven’s 9th Symphony at Seoul Concert Hall.

In 2015 he leads Masterclasses for conductors and accompanists in the USA (Duluth and New York) and in Bulgaria (Varna) and conducted inside of “Duomo di Milano” performance of a “semi-staged” version of U. Giordano’s Mese Mariano and Perosi’s La Resurrezione di Cristo.

In 2016 he made his debut at Meininger Theater with Rossini’s Il Barbiere di Siviglia.

In 2017 Maestro Seghedoni conducted a new production of Puccini’s “Gianni Schicchi” at Teatro Pavarotti in Modena with Stefano Monti as a stage director.

In March 2018 Maestro Seghedoni conducted for the first time in New York at the Carnegie Hall, a program of music by Wagner, C. M. von Weber and Glück.

As a Composer, he got acknowledgments in important festivals and competitions. He has composed operas: “La corista” (1990 – Marseille National Theater), Una Storia da raccontare (2001 – Teatro Sperimentale, Ancona), Alice (2005 – Teatro Piccolo Regio, Torino). In 2005 he was asked to compose a “Gloria” for baritone, Choir, and Orchestra to celebrate the 60th anniversary of Valle d’Aosta region.

The Serbian string quartet TAJJ requested him a piece to be performed in their 2006 Italian tournèe. This piece was released in Autumn 2006 on the live CD recorded by TAJJ during the tour.

Recently he has been invited to write new arrangements for an entire show about the life and music of Edith Piaff, to be performed at end of April in Teatro Giacosa in Aosta. In December 2014 Maestro Seghedoni conducted at Teatro Comunale Pavarotti in Modena his new work “The gardener”.

Maestro Seghedoni collaborated at the Soundtracks of Lee Daniel’s The Butler, A.G. Inarritu’s “Birdman” and at “Old fashioned”.

Since 2014 Maestro Seghedoni is the “Arranger in residence” of “Oper im Berg” a private opera company based in Salzburg.