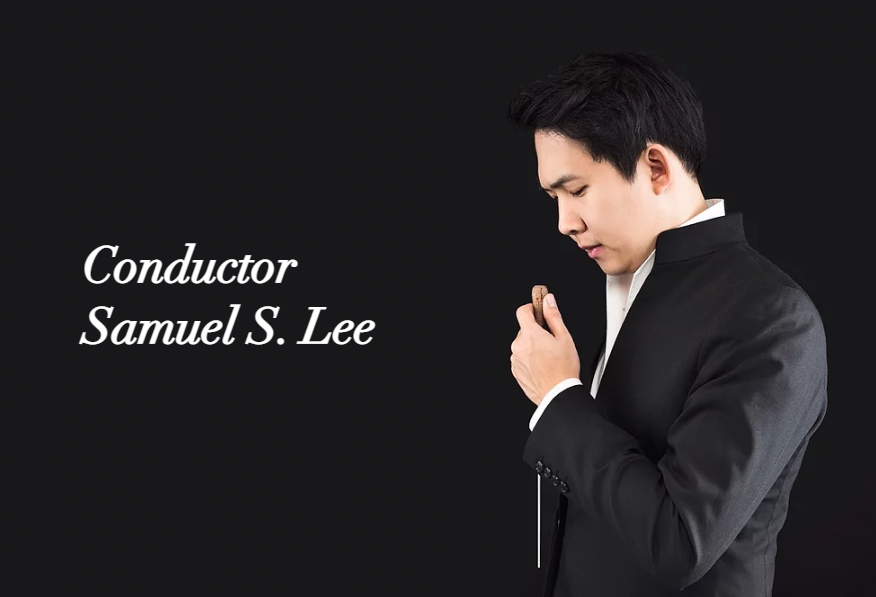 Samuel S. Lee won the 1st prize at the BMI International Conducting Competition in Bucharest, Rumania. The prize consisted of several concert engagements with representative Rumanian orchestras. He was also invited as a conductor to a Colombian concert tour. Recently he won the 1st prize at the International Conducting Competition in Taipei, where he performed with Evergreen Symphony Orchestra.

He was born in Seoul / South Korea in 1990, received his first violin and piano lessons at the age of four, and at the age of ten the first viola lessons with Prof. Myung Hee Cho. He was educated at the Yewon Music School and the Seoul Arts Highschool as a violist, and in 2007 he started his viola studies with a diploma from Prof. Tabea Zimmermann at the Hochschule für Musik “Hanns Eisler” Berlin. In 2011, he completed his diploma with the highest honor and he completed an additional study course with Prof. Tabea Zimmermann in Konzertexamen.  He also took Bachelor and Master degrees in the orchestral conducting with Prof. Christian Ehwald at the Hochschule für Musik “Hanns Eisler” Berlin.

As a violist, he attended masterclasses from renowned musicians such as Yuri Bashmet, Nobuko Imai, Tatjana Masurenko, Roberto Diaz, Hartmut Rohde, the Melos Quartet, the Artemis Quartet, as well as the Carl Flesch Academy in Baden-Baden.

He participated in the Seiji Ozawa International Academy Switzerland under Seiji Ozawa, Prof. Nobuko Imai, Prof. Pamela Frank, and the Tokyo String Quartet where he performed concerts at the Victoria Hall in Geneva.

From 2012 to 2014, he was a scholarship holder at the Oscar and Vera Ritter Foundation and has received scholarships from the Villa Musica Rhineland-Palatinate and the Deutsche Stiftung Musikleben.

From 2009 to 2017, Samuel S. Lee was a member of the Novus String Quartet, and received lessons under Prof. Christoph Poppen and Prof. Hariolf Schlichtig at the Hochschule für Musik und Theater München. The Novus String Quartet has won 2nd prize at the 61st International music competition of ARD Munich and in 2014, 1st prize at the Salzburg International Mozart Competition.

As a prize-winning tour of the ARD music competition, Samuel S. Lee has performed in the Kammermusiksaal of the Berlin Philharmonic, among other venues such as in Schwarzwald Music Festival and the Schwetzingen Festival. In Latin America, with Novus Quartet, he participated in the Credomatic International Music Festival touring Costa Rica, El Salvador, and Panama.

He took part in the International Mendelssohn Festival as a conductor and conducted the Hamburger Sinfoniker. He was also selected as an active participant where he received masterclasses by maestros such as Daniele Gatti, Riccardo Muti, Markus Stenz, Stefan Blunier, Ulrich Windfuhr, Jin Wang, Luis Miguel Clemente.     Samuel S. Lee assisted Vladimir Jurowski for a concert in Korea at Seoul Arts Center, where he conducted the London Philharmonic Orchestra.

In 2019 he was invited to conduct the Orchestra Giovanile di Siena in Daniele Gatti's live audition for Chigiana International Music Festival in Siena; he worked intensively in the following repertoire ‘Firebird Suite’(1919) by Stravinsky, ‘Concerto for Orchestra Sz.116’ by Bartók, ‘Ma mère love by Ravel.

Since 2016, he has been conducting the C.P.E.Bach Musikgynasium Orchestra in Berlin and teaching viola as a Professor at Hochschule für Musik und Theater “Felix Mendelssohn-Bartholdy” in Leipzig.

2021 he will mark his Tokyo Début with the Opera