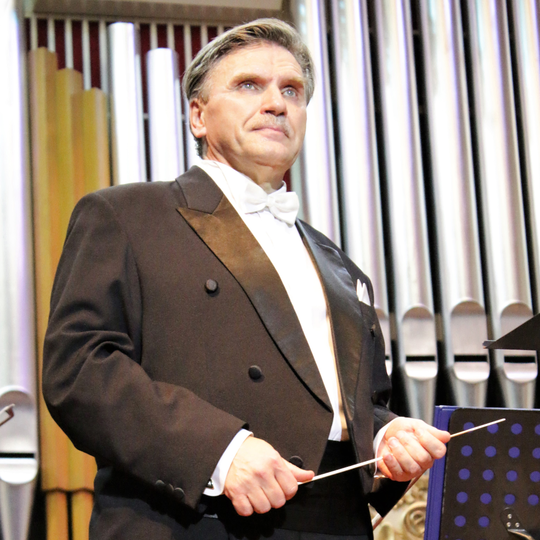 Roman Moiseyev is a symphonic, opera, ballet, choral conductor, professor, public figure. One of the most interesting Russian conductors of his generation. Was born in 1960, in Moscow, Russia.

Roman Moiseyev obtained a magnificent musical education at the famous Academic Music College at the Moscow Conservatory (Merzliakovka), at the Gnessins Russian Academy of Music and the Moscow Tchaikovsky Conservatory with Great maestro Dmitry Kitajenko.

In 1993-1994 Roman Moiseyev underwent a study course under the leadership of the Great Russian conductor Gennady Rozhdestvensky. There, he displayed a number of valuable professional qualities – «bright emotionality, true sense of style, well-developed performance energy and manual technique easily perceived by the artists of the orchestra».

He also improved his mastery at the master classes of famous Professors Iliya Musin, Elizabeth Kudryavtseva, Alexander Dmitriev in Saint-Petersburg and Arnold Katz in Novosibirsk.

Moiseyev's career as a conductor started in 1979 on the Board of the Moscow Music-Choral Society. In 1981 Roman Moiseyev organized the Moscow Chamber Choir at the Maxim Gorky Palace of Culture, where served for 10 years as Art Director and Conductor. In 1992-1995 he was the Music Director and Chief Conductor of the Philharmonic Cappella of Moscow.

In 1995 Roman Moiseyev conducted the Symphonic orchestra of the Adygea Republic. In 1996-1997 he became the head of the Youth Symphonic Orchestra at the Gnessins Russian Academy of Music. Since 1999 Musical Director of the Buryat National Opera House in Ulan-Ude where he staged a number of performances including «The Queen of Spades» by P. I. Tchaikovsky and «Die Fledermaus» (The Bat) by J. Strauss II. Since 2006 he has been Conductor of the Moscow Symphonic Orchestra...

At present, Roman Moiseyev cooperates with the best Russian symphonic and opera collectives. His creative work has been highly appraised in Belarus, Hungary, India, Kazakhstan, Mongolia, Ukraine... Maestro Moiseyev draws in young talented musicians to participate in his performances from as far as Russia, Germany, Israel, Japan, Korea, USA and other countries. He also conducts workshops for trainee conductors..

Author of Publications, Reviews, Collections (including the «Choirmaster Library», 50). Participant of Civil forums, conferences of Nonprofit Public Organizations (NPO) in Culture. Member of the International Union of Musical Figures. Chairman of the All-Russian Public Movement «Classical Musical Arts». Roman Moiseyev was awarded a medal of the Ministry of Culture of the Russian Federation and a letter of appreciation from the Government of Moscow (2019).