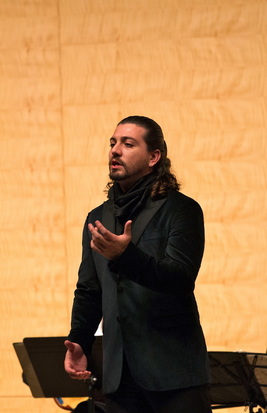 Mete Tasin is a European Opera & Classical Crossover Singer, born in Würzburg, Germany, and raised in Turkey.  He became enamored with Music and Dance at a young age, showing great promise to his teachers.  In his teenage years, he decided that his passion was singing and he became solely focus on developing his voice. He soon began studying with the best vocal professors he could find both in Europe and the United States.

Mete became a student of Prof. Güzin Gürel at Istanbul University State Conservatory and with Patricia McCaffrey at Brooklyn College (Master of Music).  His voice made such an impression on world-famous Montserrat Caballe during a Master Class that she personally invited him to Barcelona to study with her and Carmen Bustamante at the Conservatory del Liceu Barcelona. There, he earned a Master of Performing Classical Music.

Mete's professional career began in THE USA, with roles in productions of Carmen ( Don Jose ) and Lucia di Lammermoor ( Arturo ). Since then, Mete has been in many leading roles in Turkey, Europe, and most recently, the United States including the lead role of Arlecchino in Pagliacci by Leoncavallo and Gastone in Verdi's La Traviata at the Opera San Jose in California. He has also represented the San Francisco City Opera by singing at Union Street and North Beach Festivals as a soloist. Recently he performed with the Aurora Mandolin Orchestra in San Francisco, and as a soloist at the renowned "Palau de la Musica" in Barcelona.

The multi-talented Mete not only composed music for Ali Baba and 40 Thieves which premiered in New York, he also played a Sultan role, which hailed “fabulous” reviews from critics and audiences alike.