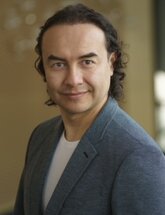 Tenor Marco Antonio Rivera was born in Mexico City and grew up in a musical family. He studied singing in Mexico before coming to Germany and has since received lessons from Klesie Kelly, George-Emil Crasnaru, and Francisco Araiza. He also attended masterclasses with Gema Visser, Doreen Defeis, James Hooper, Peter Schreier, and Thomas Mayer. In 2007 Marco Rivera won the Hermann Prey Scholarship, and in 2009 the Cologne Chamber Opera Prize.

A regular concert schedule has already taken him to the Konzerthaus am Gendarmenmarkt in Berlin, the Zurich Tonhalle, the Altenberg Cathedral, the Münster Cathedral, and the Cologne Cathedral, among others. In the opera field, he has made guest appearances at the Landestheater Detmold, the Städtische Bühnen Münster, the Klassik Festival Monschau, the Festspielhaus Baden-Baden and the Kölner Philharmonie, among others. His extensive repertoire includes major leading roles such as Alfredo in La Traviata, Duke in Rigoletto, and Rodolfo in La Bohème. In the season 2016/17 he made guest appearances in the role of Pinkerton in the revival of Madama Butterfly at the Saarländisches Staatstheater in Saarbrücken and in the title role of Fra Diavolo at the Theater für Niedersachsen in Hildesheim.

He also performed as a soloist in Verdi's Requiem in Berlin and in Beethoven's 9th Symphony in Gotha. In the season 2017/18 he was a guest at the Koblenz Theatre, where he performed the role of Rodolfo in Puccini's La Bohème. In the season 2019/20 he made his debut at the Stadttheater Bremerhaven as Turiddu in Cavalleria rusticana and Canio in Der Bajazzo, as well as guesting with Alfredo in La Traviata at the Théâtre Olympe de Gouges de Montauban in France, among others. In the season 2020/21 he performed in Bremerhaven's opera with tragedy Carmen.