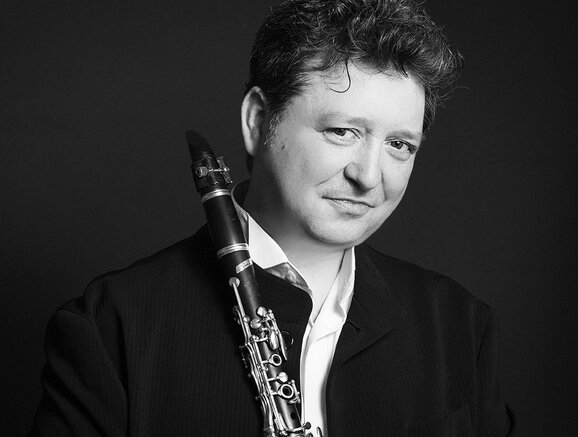 Joan Enric Lluna, one of Spain’s leading musicians, combines his work as a clarinetist with orchestral conducting and teaching. Joan made his début as a conductor with several orchestras in Spain and the UK with great acclaim and has performed as a conductor-soloist with orchestras as the Manchester Camerata, Luzerne Festival Strings, Covent Garden Chamber Orchestra, Orquesta de Valencia, ADDA simfònica, etc.

Joan conducted 2 concerts celebrating the 30th anniversary of the Cadaqués Orchestra at the Palau de la Música in Barcelona with great success. He has commitments as a conductor and soloist-conductor for the next two seasons along with European orchestras including the English Chamber Orchestra. In April 2019 Joan made his début as a conductor-soloist with the Berliner Camerata in the Berlin Philharmonic Kammermusiksaal and the Karl Philip Emmanuel Bach in Frankfurt (Oder).

His commitment to Chamber Music has taken him to perform regularly with string quartets such as the Alexander, Tokyo, Brodsky, or Jerusalem; to share trio with Tasmin Little and Martin Roscoe or Lluís Claret and Josep María Colom among others, and collaborate with first-class international artists. His appearances at the City of London Festival, Festival Classique in The Hague, San Francisco Chamber Music series, Berlin’s Konzerthaus, or the Liceo de Cámara in Madrid have been of special notice. Joan has premiered and commissioned many chambers works by composers like John Tavener, César Cano, J. Torres, I. Zebeljan’s, P. Barker, D. del Puerto, and H. Khoury. In 2005 Joan formed Moonwinds, and he directs since 2009 the International Festival “Residències de Música de Cambra” in Godella, Valencia (Spain).

In November 2020 Joan presented Moonwinds Simfònic, an inclusive orchestral project that unifies great artists and local young talents in Valencia, Spain. The audience received the presentation concert and the following concerts with great enthusiasm. As a soloist, Joan has performed and recorded the clarinet concerto repertoire, and many composers have written new concertos for him, among them Sir John Tavener, Joan Guinjoan, Mauricio Sotelo or Sanchez Verdú. He premiered recently concertos dedicated to him by Jesus Torres and Isidora Zebeljan.

His premieres of “Qualia” with the OCV and Zubin Metha and “Elogio del Horizonte” by Sánchez Verdú were greatly acclaimed in Madrid and Munich the Bayerische Rundfunk. Among his recordings, he has made three of Mozart’s clarinet concerto, with Sir Neville Marriner (Trito), the Bournemouth Sinfonietta, and Antony Pay and the English Chamber Orchestra (Cala). He has recorded also with the Tokyo, Bordsky, and the Alexander String Quartets. His interest in recovering and promoting Spanish music has produced 5 recordings, for Harmonia Mundi, Clarinet Classics, and Tritó, the 2 last ones dedicated to Spanish composers in the exile of the Civil War.

With Moonwinds Joan has recorded unknown divertimenti by Martin y Soler and Mozart’s Gran Partita and wind Serenades. The CD “Le jour de l’an” with Moonwinds, dedicated to Spanish composers in exile, was nominated for the Valencian Music awards. His last pre-cordings include, “jazz impact”, “Soleriana”, dedicated to maestro Rodrigo, and “Weber”, with the two clarinet concertos and symphonies, which have received great reviews in international magazines such as Gramophone or Diapason. Joan was appointed in 2006 by Lorin Maazel principal clarinet of the Orquestra CV del Palau de les Arts Reina Sofía in Valencia. He was previously a member of the Bournemouth Sinfonietta, and principal guest in orchestras such as Royal Philharmonic, Academy of St. Martin-in-the-Fields, Chamber Orchestra of Europe, etc.

He was a co-founder of the Cadaqués Orchestra, where he remains principal clarinet. Joan teaches clarinet and chamber music at the Escola Superior de Música de Catalunya in Barcelona and Trinity College of Music in London. He is regularly invited to give masterclasses and recitals in major Music centers such as California State University, Royal College and Royal Academy in London, or Royal Scottish Academy of Music in Glasgow.