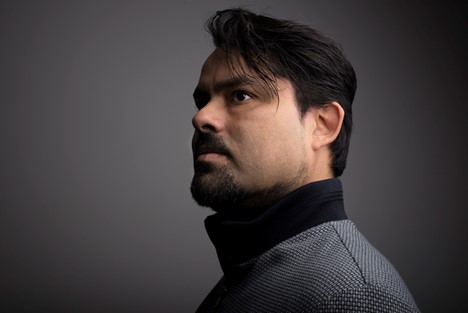 Henry Vega, born in New York City (1973), is an active composer and performer of new music whose works appear in productions of theatre, dance, and concert music that focus solely on modern artistic trends. His music ranges from virtuosic instrumental writings to subtle colorful compositions orchestrating traditional instrumentations with the world of electronic sound. His current interests lie within theatrical settings of his music often in combination with multimedia artists over minimal aesthetics that cross simple harmonies with noisy counterpoints.

Vega's works have been presented on radio programs across Europe and performed at festivals and venues in Europe and the Americas including La Monnaie (BE), Deutschlandfunk (DE), MATA Festival (US), November Music (NL), EYE Film Institute (NL) and Stedelijk Museum Amsterdam (NL) among others. He has had the pleasure to write music for soprano Claron McFadden and ensembles such as Ensemble Modelo, the MAE, VocaalLab, Ensemble Integrales, the Ragazze String Quartet, the Roentgen Connection, and his trio The Electronic Hammer.

Many of his works have been composed for instruments in combination with the computer as a live instrument aiming to create new sounds for his compositions that fuse the virtuosity of the instrumentalists with digital variations of themselves. This combination has been an influence on the way the music sounds as well as an inspiration for how to approach acoustic instruments and scores, something which is evident from his more recent compositions.

Vega’s recent CD release, Machines, is a collection of commissioned instrumental works between 2009 and 2012. In 2011 Vega released the CD  for vocalist Anat Spiegel and electronics which has received dozens of radio performances across Europe. He has also had works released on ICMC 2004 (Idoru in Metals) and in 2011 he was included in the 'Anthology of Dutch Electronic Music 99-10' (The Hallelujah Drones).

His music has received first prize from Musica Nova (Czech Rep.), John Cage Year Festival (Lublin), and Crash Intl. Biennale (Poland), Dragons Den @ Queens (UK), and SCI (US) as well as Honourable Mention from the Hungarian Radio EAR competition. Since 2005 he has been awarded commission grants from the Dutch Fonds Podium Kunsten.

Vega holds a Ph.D. from Queen's University (SARC) in Belfast. Previous to this he studied composition at Florida Intl. University with Orlando Garcia and Kristine Burns, at the University of North Texas with Jon Nelson, and the Institute for Sonology at the Royal Conservatory of the Hague were his mentors, Paul Berg, Joel Ryan, and Kees Tazzelar, guided him in programming, improvisation, and composition. During these years Vega has also had the opportunity to study in private master classes with Franco Donatoni, Earl Brown, James Tenney, Francis Dhomont, and Christian Wolff.