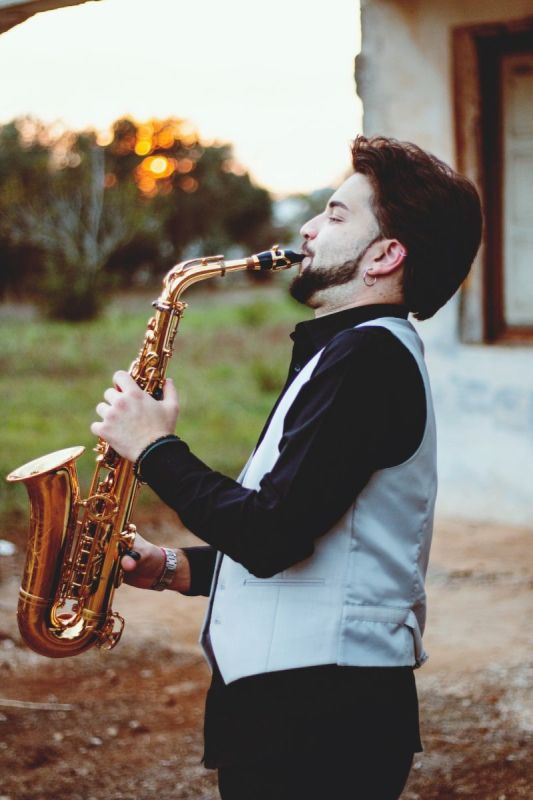 He had the first approach to the world of saxophone when he was six trough the music School of the music band “M° Massimino Vitale” located in Torre Santa Susanna (BR). He began his career in 2012 at music high school “G.Durano”, under the guidance of M° Danilo Russo; at an early age, he won lots of first prizes as soloist and chamber musician.

Once again under the guidance of M° Danilo Russo, he obtained a first level academic diploma in Saxophone at “Istituto Superiore di Studi Musicali P. I. Tchaikovsky” in Nocera Terinese (CZ) with a score of 110/110 and praise; he alzo received an honorable mention for its excellent final performance.

He has been able to collaborate with different orchestras over the years such as “Orchestra Filarmonica della Calabria” and “Apulian Youth Simphony Orchestra”, performing in a large number of most important Italian theatres as : Teatro San Carlo in Naples, Teatro del Maggio Musicale Fiorentino, Teatro Verdi in Brindisi, Teatro Politeama in Catanzaro and the prestigious Sala Scarlatti in Naples. In addition of his academic training, he continued to improve with some of the biggest names in saxophone like Francesco Salime, Mario Marzi, Federico Mondelci, Massimo Mazzoni, Marco Gerboni, Damiano Grandesso, Alex Sebastianutto, Naomi Sullivam, Jerome Laran, Lucy Derosier, Philippe Portejoie, Lars Mlekusch, Henriette Jensen, Jhoan Thorell, Antonio Canovas Moreno, Nicolas Arsenijevic, Michél Supera and Vincent David. Both in 2020 and 2021, he took part in the one-year saxophone course of M° V. David in Rome, organized by “Associazione Exigentia”. In 2021, with the duo "Buccoliero - De Vivo" (saxophone - Piano) he recorded his first album, entitled "Una Voce Poco Fa .." produced by Accademia 2008 label and supported by Vandoren France.

In parallel to his artistic activity, he has editorial works to his credit, including adaptations, critical reviews and arrangements, mainly for saxophone. Many of these works are published with various publishing houses, including Da Vinci Publishing and Accademia 2008. In 2022 he became the artist Ambassador of the renowned company JLV Paris. He is currently working as tutor in the saxophone class of “Istituto Superiore di Studi Musicali P. I. Tchaikovsky” in Nocera Terinese (CZ).