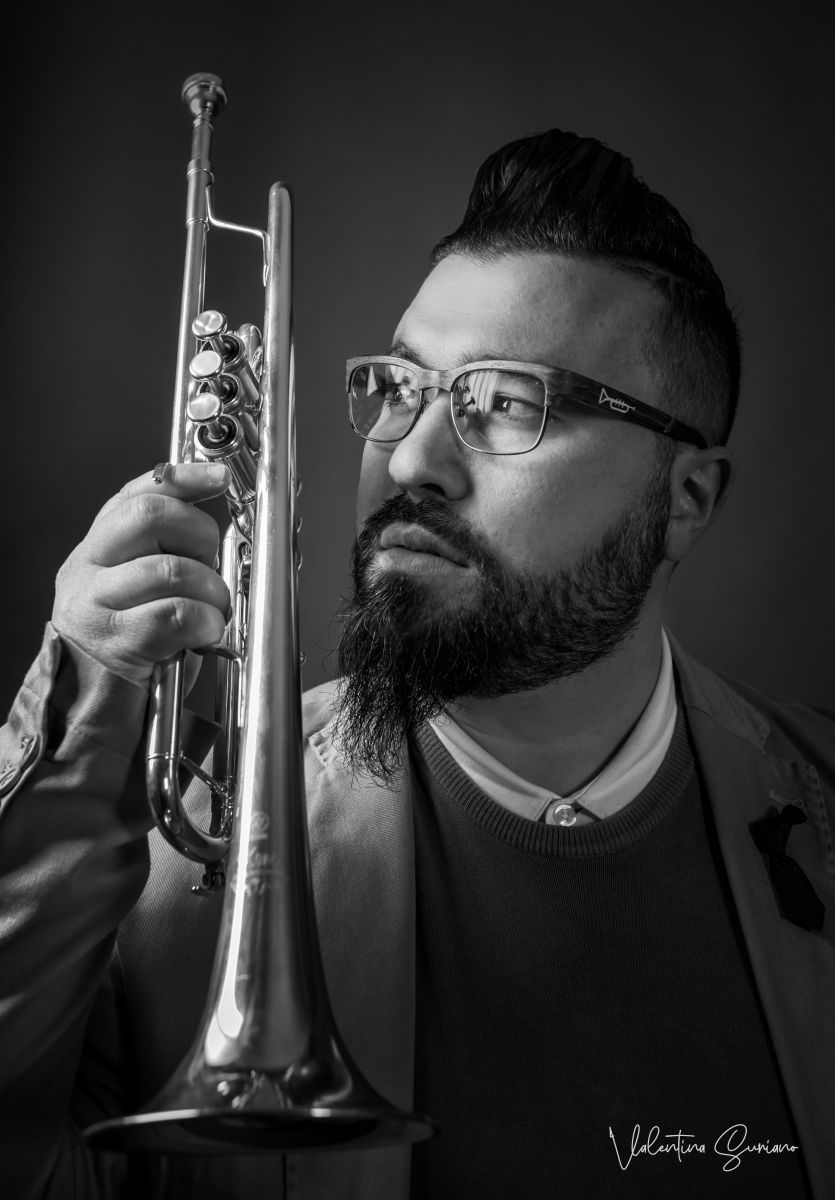 In June 2006 he graduated with full marks in Classical Trumpet, subsequently obtained the Enabling Degree for teacher training (Bi.For.Doc - AL77) and in June 2014 he graduated from the II Level Biennium in Jazz Trumpet with 110 honors and was mentioned at the V. Bellini Conservatory of Palermo.

It boasts several collaborations and participation in Jazz and Symphonic Orchestras, Jazz Festivals, and soundtrack recordings for films by composers such as Luis Bacàlov.

Recently returned to Italy after his studies at the "Berklee College Of Music" in Boston, playing in numerous concerts organized by the same College and in various American Jazz Clubs. In addition, he participates in the recording of the disc "Transitions" (Jazz Revelation Records and John Clayton) which every year boasts the participation of the best Berklee students.

Winner of the XVI edition of the "Massimo Urbani International Prize" for Jazz Soloists, he records his debut album "Rewind" on behalf of the "Musicamdo Jazz Record / IRD" together with Co-leader Francesco Patti at Sax Alto (ex-aequo winner), Giuseppe Cucchiara on Double Bass, Seby Burgio on Piano and Stefano “bushman” Bagnoli on Drums. The liner notes are signed by Enrico Rava.

Since June 2014 he has been a permanent member of the National Jazz Young Talents Orchestra directed by Paolo Damiani with which he has the Double Disc "Obscene Rivolte" produced by Parco Della Musica Records 2019, the Disc “ Ma che ci gi passi new closet ” ” Produced by Camilla Records CAM - 015.2 and the Film / Documentary “ Quest 'Italia suona il Jazz ” by Marco Guelfi produced by Solaria Film and Luce Cinecittà, also playing in the best Italian Theaters and European Jazz Festivals as“ Solo Trumpet”.

In collaboration with Rai Cultura, Fondazione Musica per Roma, and Novara Jazz, he participates in the Film / Documentary of the Young Talents Jazz Orchestra directed by Paolo Damiani “I RAGAZZI DEL JAZZ” in primetime on Rai5. The program was produced by the TV Production Management of the Rai TV Production Center in Rome.

In December 2018 he released his second Lead Recording Work "Water Trumpet" (self-produced) - Giacomo Tantillo 4et trained by Andrea Rea, Piano | Matteo Bortone, Double Bass | Enrico Morello, Drums.
The album is the result of artistic and human experiences, between Sicily and the period of study at the Berklee College of Music in Boston. This last experience has significantly changed Tantillo's music. The liner notes are signed by  George Garzone. Subsequently, he is the Winner of the "New Generation Jazz" Call supported by MIBAC (Ministry of Cultural Heritage) I-Jazz and SIAE playing in the most important National and International Jazz Festivals representing Jazz in Italy throughout 2019.

In March 2019 as a teacher of the "A.Toscanini" Conservatory of Ribera (AG) he was invited by the A.Glazunov Conservatory of Petrozavodsk to carry out Masterclass activities, as well as to perform concerts as a Jazz Soloist of the "CMP Big Band" and the department's "Brass & Percussion Ensemble". He is also nominated as a member of the jury of the prestigious "Silver Sound International Festival 2019".

During his professional career, he played concerts in America, Canada, Russia, Sweden, Belgium, France, and Malta.

He has played and recorded records with: