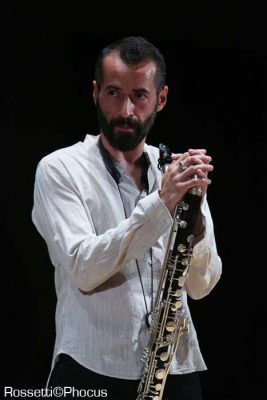 He graduated in clarinet at the Gaetano Donizetti Civic Institute; after a short experience in the orchestra "I Pomeriggi Musicali di Milano" and several collaborations with wind orchestras of Italy (Gazzaniga, Samassi, Rovereto), he began studying alto saxophone with Daniele Cavallanti. Through his guide, he became the first saxophonist of the Creative Jazz Orchestra workshop, founded and directed by Cavallanti himself: a contemporary music collective inspired by free formations and experiences such as the JCO, the Liberation Orchestra, the Global Unity and the Italian Instabile Orchestra.

Born in Bari in 1978, he lives in Milan and has numerous projects under his belt as a leader and as a sideman. In 2018 he was nominated by the survey organized by Musica Jazz as the 6th best new Italian jazz talent. In the same year his album "The Big Earth" is ranked as the 5th best album of the Italian jazz scene.