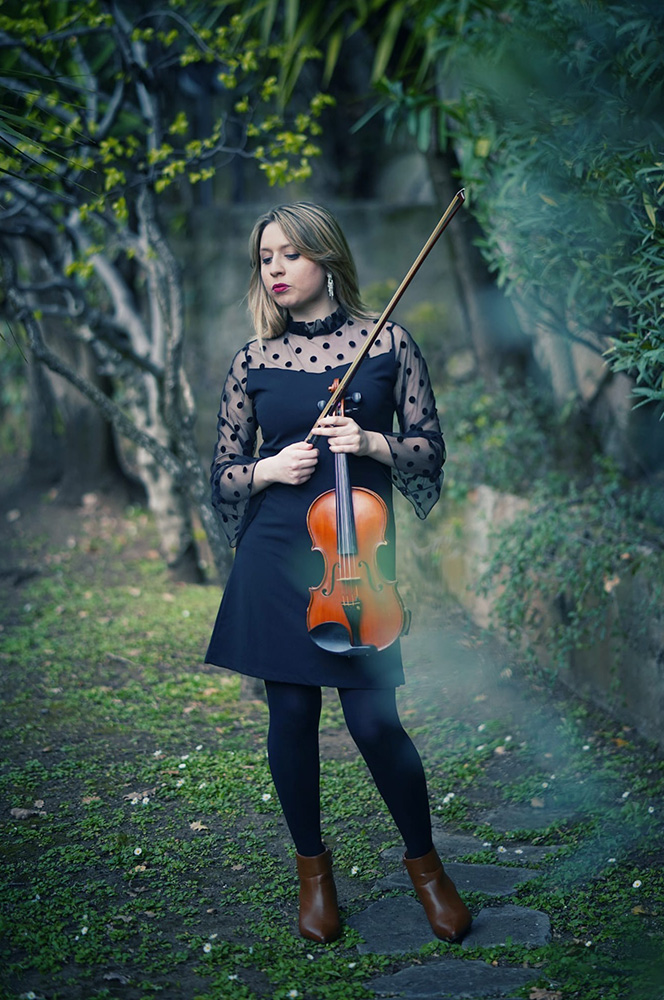 Federica Severini was born in 1996 in Mercato San Severino (SA) and started to play the violin at six years old. She obtained the final diploma cum laude at Conservatorium San Pietro a Majella of Naples. She graduated in violin and chamber music at the Accademia Nazionale di Santa Cecilia in Rome with Sonig Tchakerian and Carlo Fabiano. She obtained the final diploma MAS (Master Advanced Studies) with M. Klaidi Sahatci at the Conservatory of Italian Switzerland in Lugano and she is a student of M. Francesco Manara at Milano Master School. She is also a student of M. Accardo at W.Stauffer Academy in Cremona and at international Chigiana Academy in Siena. She obtained a scholarship as one of the best students of Stauffer Academy in Cremona and she played as soloist in Teatro Eliseo in Rome with Orchestra da Camera Italiana directed by M. Salvatore Accardo.

She studies currently with Marco Rizzi at the Musikhochschule Mannheim for the course Orchestersolist and attends masterclasses with Tomasz Tomaszewski and Guy Braunstein. She is actually 1st Violin Tutti at La Verdi Symphony Orchestra in Milan and she won also the audition for Tutti Violin at Orchestra Sinfonica Nazionale RAI in Turin. She has won the Praktikum for Göttinger Symphonieorchester und she is violin Professor at Conservatory Mascagni of Livorno, Italy. She is a member of the Orchestra Academy of Teatro alla Scala, where she was selected as Concertmaster for the years 2017-19. She was also invited to play in Tiroler Festspiele Orchesterakademie at Festspielhaus Erl directed by M. Gustav Kuhn. She was selected as first violin of Ensemble Bernasconi of Accademia Teatro alla Scala and she was involved in a concert dedicated to Frank Zappa for Stresa International Festival, Auditorium Parco della Musica in Rome and Teatro Valli in Reggio Emilia directed by Kristjan Järvi and Peter Rundel. She was also selected as Concertmaster for the American Tournée of Accademia Teatro alla Scala, directed by Ivan Fisher, and she played in the Auditorium of Maryland and Princeton Universities and at Peter Jay Sharp Theatre in New York.