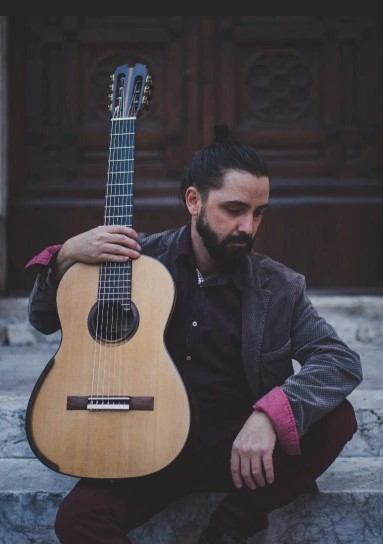 He started playing the guitar at the age of 11. At 18 he follows the seminars of G. Unterberger at the Lizard Music Academy. He graduated from the Faculty of Letters and Philosophy of the University of Siena, specializing in music and entertainment and graduated in guitar at the A. Morlacchi Conservatory in Perugia.

In 2006 he joined the teaching group of the Peter Pan orchestra at the Siena Jazz foundation together with Marcello Faneschi, Ines Garbi, Martina Guideri. And in 2009 he moved to the direction of the project. In 2006 he began his collaboration with Giorgio Zorcù and Sara Donzelli creating music on stage for the theatrical show "The secret of Shahrazàd". In the winter of 2001, he began a collaboration, still active, with the children's museum of Siena, "setting music" for the paintings of an exhibition held in the "Magazzini del Sale" of the Palazzo Comunale Senese.

He composed the music for the Teatro Laboratorio Teatrale Senese LUT and the soundtrack for a film by Riccardo Bellucci. In addition to studies, teaching, and composition he has always also been engaged in intense live activity with various formations ranging from all musical genres, from rock to jazz, from blues to popular music. He played with the GOP. direct from M0   K. Lessman.

In 2004, together with E. Bocci (vocals) and M. Campanini (texts) he created the "Compagnia Musicale le Voci del Vicolo", a band that offers original material mixing ethnic and popular sounds with jazz and swing, proposing everything under a a form that goes back to theater-song In 2006 with G. De Michele on vocals, M. Chianucci on double bass, and E. Pellegrini on drums he founded the “Whiskey & GESSO” quartet of swing music.

In 2007 he created the "Etruscology" project creating original music inspired by Etruscan instruments and making use of the collaboration of Mirco Mariottini on clarinet, Maurizio Costatantini on double bass Ronhi Behara on cello then followed by Massimo Guerri on sax and Andrea Beninati on cello and percussion.

In 2009 he founded the Latino FER group with Emanuele Pellegrini and Raffaele Toninelli. In 2010 he began his collaboration with the singer Anna Granata dedicating a project to immigration.

Since 2008 he has also been part of the “Dixie Band Street Parade” group directed by maestro Massimo Guerri.

During these years various awards have also arrived such as:

Critics Award for "a song for Amnesty International" 2008 edition with the "Voci del   Vicolo", finalist of the "May 1st all year" 2007 contest with the voices of the alley in 2007 performance at MEI in Faenza with the "Voci del  Vicolo ”In 2006 finalist for the 2008  2010 editions of the  Mediterraneo  Jazz   Festival with the Labirinto Choro group.

From 2013 to 2016 he taught jazz guitar in pre-academic courses at the A. Morlacchi Conservatory in Perugia.

In 2016 he is part guitarist of the jazz orchestra of the Perugia Conservatory directed by maestro Mario Raja.

CD attached to the book "What I really want" editions "the waves" 2009 CD "I think a dream like this" Ensarte editions. 2009