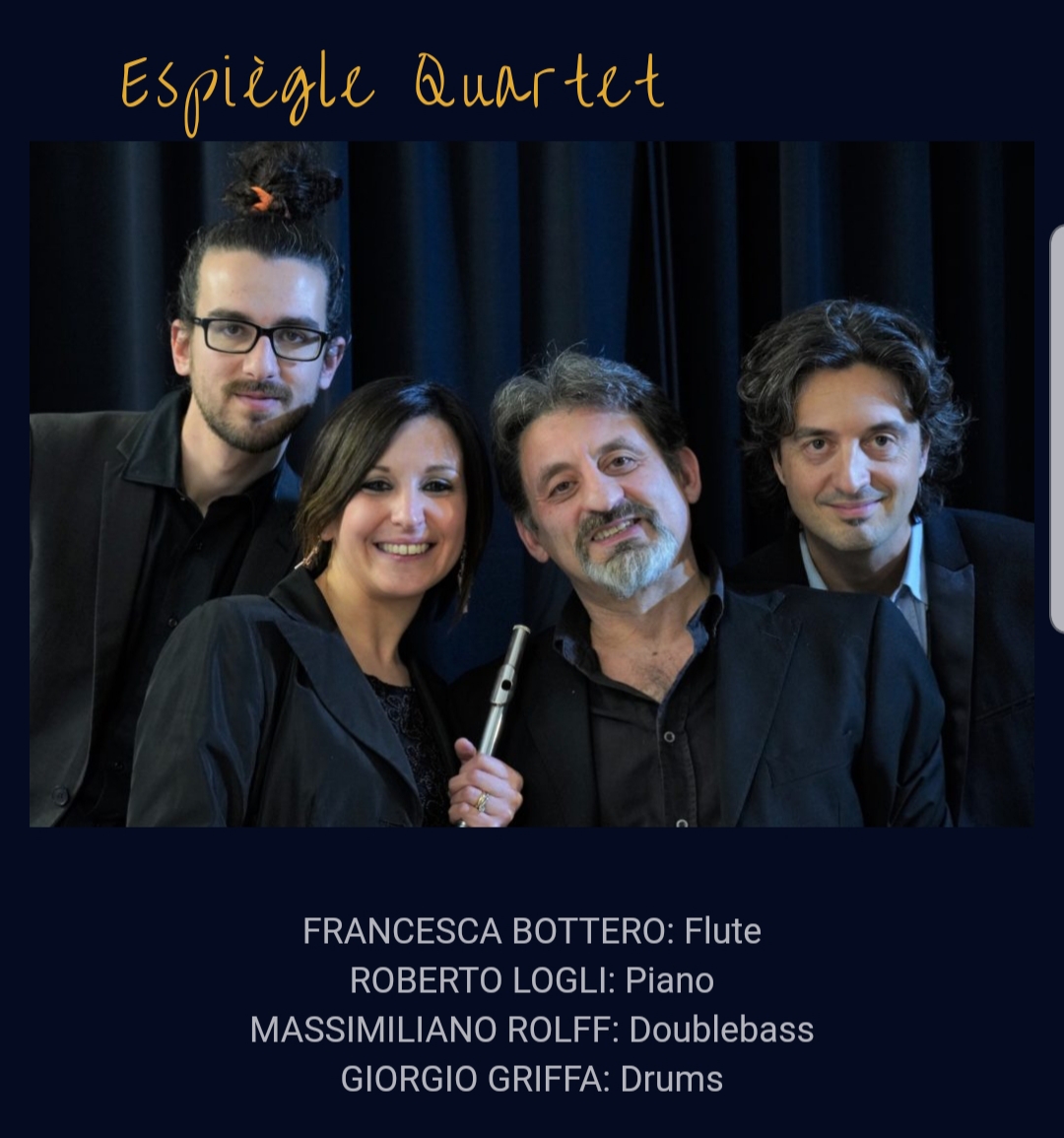 The Espiègle Quartet was conceived from the wish of the flautist Francesca Bottero to play together with jazz musicians, despite her classical studies. The Suite for Flute and Jazz Piano Trio of 1975 welcomes this desire. The Bolling Suite and the urge to "interlace" classical music and jazz, experiencing the understanding between these genres, brought these four musicians, coming from different musical areas to the creation of this interesting quartet.

The repertoire includes tracks in which the common denominator is the union of different genres, so it is possible to listen to typically classic elements offered in a particular way by the flute, combined with jazz components.

Several moments are planned from the two Suites by Claude Bolling and of Marion‟s Suite by Raymond Guiot, trying to approach a heterogeneous audience to accompany him in a pleasant musical trip that ranges from baroque elements to other blues, from counterpoint to swing, passing through interesting and pleasant improvisation moments.

Francesca Bottero, flute
She began studying flute at 8 years old. She graduated in 2000, in Novara to the "Cantelli" Music Conservatory, under the guidance of Marcello Crocco. She attended masterclasses with Emmanuel Pahud, Alan Weiss, and Maurizio Valentini. Subsequently, she has dedicated herself to the educational aspect of music, obtaining in 2006 the Second Level Academic Diploma in “Didactics of music " at the National Conservatory "N. Paganini ” in Genoa and 2009, in "Instrumental Teaching" at the National Conservatory "A. Vivaldi " in Alessandria.

She performs concert activity in various chamber ensembles, with some of which she has been deepening Piazzolla's nuevo tango, the crossover

music and the music for flute and piano by the early twentieth century.

As part of her teaching, she teaches flute at the middle school in a musical address at the IC Sampierdarena (Genoa) and musical propaedeutics in several primary schools.

Roberto Logli, piano
Born in Genoa, he studied at the “N. Paganini Conservatory” under the guidance of Prof. Lidia Baldecchi Arcuri, graduating with honors. He also followed masterclasses with Sergej Dorenskij in Salzburg and with Aquiles Delle Vigne at the Accademia di Palazzo Ducale in Genoa. He studied composition with Adelchi Amisano and chamber music with Massimiliano Damerini in Genoa and with the Trieste trio in Fiesole. He is the winner and finalist of numerous piano competitions in Italy and abroad.

He has performed and performs concerts in Italy and abroad, proposing himself in the double version of author and interpreter.

Massimiliano Rolff, double-bass
Rolff’s playing, along with a deep knowledge of the tradition mixed with a personal taste for composition, became a landmark for many jazz lovers across Italy. In over 15 years of their music career, Massimiliano Rolff toured extensively Europe and

U.S. alongside some of the world’s finest jazz musicians released 7 albums as a leader and more than 20 as sideman and co-leader.

Based in Genoa, in the ‘Italian Riviera’, is today leading and performing his music, with several bands across Italy and Europe. Massimiliano (born June 1973) starts playing music as self-taught guitarist at the age of 12. At the age of 16, he’s already performing across Italy as a young bass player with different pop-rock bands. In his house, Massimiliano has the chance to be exposed to many different listening experiences: from rock to jazz to classical music, he’s in love with British rock and new wave music. He’s 16 years old, when he has the luck to attend a concert of Miles Davis (Amandla Tour), this event will change his life. At the age of 20, he finally decides to dedicate his life to music, and moves to Holland, looking for a more international environment. In 1999 he graduates from the Jazz Conservatory of Groningen (Holland) in Electric Bass and Music Pedagogy. After a few months, thanks to a scholarship from the Dutch government he also follows a master at the Bass Collective in New York City with John Pattitucci and Lincoln Goines. In the year 2000, he settles back in the sun, in Genoa, Italy. After some years of professional side-work with national Italian pop acts, in 2004 he buys his first double-bass. His music life will change, again.

In 2003 he has released with the band Oleo the album “Next Beat” for Scenario Music, with a worldwide distribution, followed by many other compilations on 5 continents.

In 2009 he released is a new album as composer and bassist:” Naked” for Effemusic, with a band of national jazz stars (Cisi/Pozza/Zirilli). Both records won the 1st price as “Best Album Jazz LightHouse” in 2006 and 2009, and got a great following of critics and audience.

In 2012 Rolff released “More Music”, the second album of original composition with the band “Unit Five”.

In 2014 he releases the album “Scream!” for BlueArc Records, his 4th album as leader and composer, selected among the best 100 jazz records from the magazine jazz.

In the fall of 2018, Rolff released his seventh album as leader and composer “Home Feeling” which features Rolff’s new compositions in a special blend of jazz and Afro-Cuban music.

Since 2008, he’s founder and musical director of the Count Basie Jazz Club in Genoa, Italy, and since 2015 he teaches electric bass at the Conservatory “G.Puccini” in La Spezia and 2017 at “Nino Rota” Conservatory in Monopoly (BA).

Giorgio Griffa, drums
Born in Milan on 10/10/1989, after the study of the piano with M. Massimo Paderni at the N. Paganini Conservatory in Genoa, he began studying percussion with M. Alessandro Cardinali and shortly after the drums with the Maestro Giuseppe de Paola, Giovanni Giorgi, Alfred Kramer, Keith Balla. He attends several seminars including Isola jazz (Byron Landham), Razmataz (Peter Erskine), several editions of the seminars

He also collaborates as a drummer with symphonic orchestras: including the Sanremo Symphony Orchestra Foundation since 2015, with which he had the opportunity to play with artists such as Enrico Ruggeri, Simone Cristicchi, and Mogol directed by prestigious masters.

In 2016 he recorded a disc in Paris with the Quartet Pace Carnevale Valente Griffa for the Cross Connection project (the Tetracordo association).

Since 2015 he teaches drums in various music schools and preparatory courses at primary schools in the area.