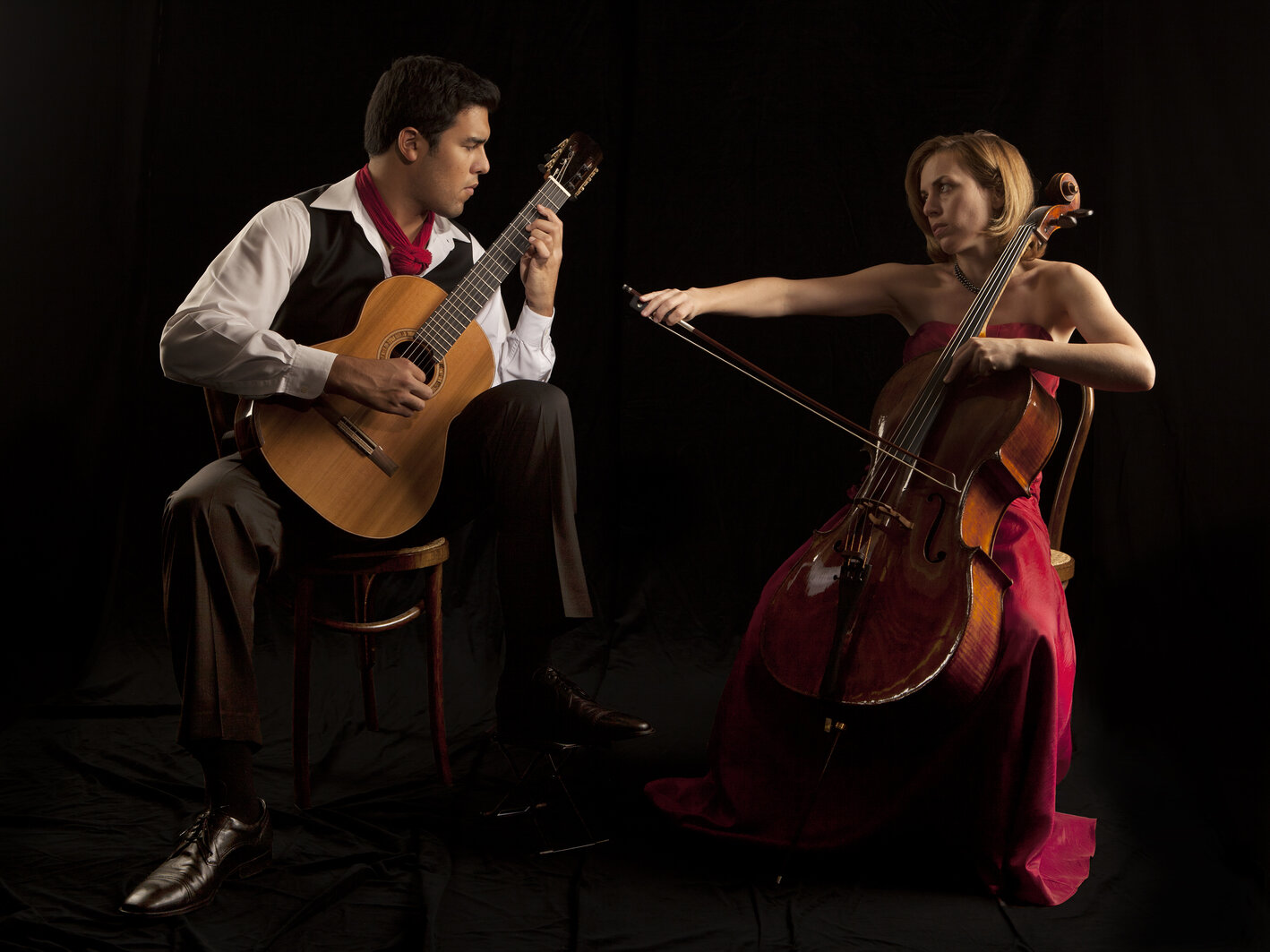 Described by the press as an excellent and exemplary musical ensemble, En Cuerdas pursues an active concert schedule in Switzerland, the USA, Mexico, Germany, Norway, Spain, and Brazil.

The duo combines traditional repertoire with modern pieces and arrangements and intensively collaborates with composers and arrangers, with several pieces dedicated to their honor.

The duo is the recipient of numerous awards and receives grant support from the City of Dübendorf, the City and Canton of Bern, the Fondation Suisa, the Fondation Suisse des artistes interprètes SIS, and Swisslos. Both musicians have also received a nuseveralividual prizes and grants.

Cornelia Leuthold and David Talamante both studied at the San Francisco Conservatory of Music under Grammy Award-winning instructors Jennifer Culp, cellist with the Kronos Quartet, and guitarist and composer Sérgio Assad.

Cornelia Leuthold (M.M.) was born in Switzerland in 1984. She is a graduate of the San Francisco Conservatory of Music where she studied a Mafor ster of Music Degree with former Kronos Quartet cellist Jennifer Culp. Besides her principal instrumental pursuits, she actively studied Baroque cello and Viola da Gamba with renowned Professor Elisabeth Reed.

Cornelia Leuthold also holds a BachBachelor's a Master of Music Pedagogy Degree from the Musikhochschule in Lucern, Switzerland. Additionally, she has taken masterclasses with Yo-Yo Ma, Troels Svane, Colin Carr, Wolfgang Böttcher, Janos Starker and, Truls Mørk, among others.

Cornelia Leuthold has received numerous scholarships and awards for her artistic merit and has performed as a soloist and chamber musician in the United States, Brazil, Mexico, Germany, and Switzerland.

David Talamante (M.M.) was born in Mexico in 1987. He is also a graduate of the San Francisco Conservatory of Music where he studied a Mafor ster of Music Degree with Grammy-winning guitarist, arranger, and composer Sérgio Assad. He also holds a Bachelor of Music Performance Degree in guitar performance at Tfrom University of Arizona with Professor Thomas Patterson and Grammy guitarist David Russell.

David Talamante has won many awards, presand tigious scholarships including a Mexican Government Fund for Foreign Studies (FONCA), guitar competitions and has performed in many concert halls, art galleries, radio and TV stations in the United States, Switzerland, Germany, Spain, Brazil and, Mexico as a soloist and chamber musician.

Examples of this are A. Ramirez’s (Misa Criolla), D. Bogdanovic’s (African Sketches), A. Piazzolla’s (Histoire du Tango), K. Belevi’s (WalzWales. Piazzolla’s (Fuga y Misterio), etc. Additionally, En Cuerdas commissioned the work MEDITERRANEO (2018) to renowned composer Dusan Bogdanovic for cello guitar duo and choir. This is presumably the first-ever written work for this instrumentation and will be premiered in April 2019.

“ Cornelia Leuthold and David Talamante form a great novel duo. The unusual combination of cello and guitar enables colorful and unexpected sounds that should become very popular. En Cuerdas will certainly contribute to the development of this new musical adventure”

“...En Cuerdas builds a bridge between contemporary music and the audiences... Exemplary was how the passionate cello singing tone from Leuthold and the folkloric color of the guitar featured the advantages of this instrumental combination... More colorful than the original in this arrangement of Piazzolla's Histoire du Tango, the first-class cellist Cornelia Leuthold made clear how regional folklore developed into Concert World Music... The excellent guitarist David Talamante used this space to sing hauntingly beautifully on his instrument...”

“It has been a pleasure to get to know Cornelia Leuthold and David Talamante in the duo En Cuerdas. Their performances are spirited and vigorous – full of devotion”

- Erik Stenstadvold, Professor of Guitar at the Norwegian Academy of Music. December 2011

“It is a pleasure that Sonoran talent transcends borders this way”.

"The intimacy of the sound enchanted the audience”.

“From the technical abilities of their instruments as well as from their musical spirit and sentiment, En Cuerdas can be described as something extraordinary: World class”.

“This is a wonderful CD! The repertoire is a nice mix of the familiar, and works that deserve a wider hearing. The Gnattali sonata is a terrific work that is played with life and imagination. The Piazzolla that closes the disc captures all the nuances of the score, and this arrangement with the cello works beautifully.

“En Cuerdas has a great sense of ensemble – balanced, great give and take, and unified approach to the variety of music on this disc. This recording should be on your playlist”. - Professor Ronald Pearl, Loyola University Maryland. February 2015

“The recording sounds terrific! It is as perfect as it can get. Congratulations!” - Composer and guitarist Dusan Bogdanovic on Quatre Pièces Intimes (CD EN CUERDAS: MOMENTS, 2015), September 2015