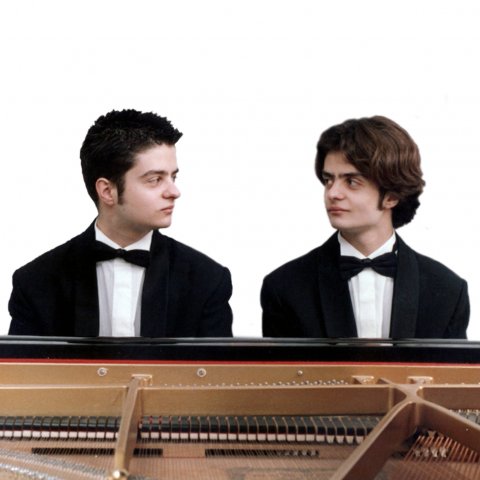 After their debut at the Carnegie Hall in New York on 10 April 2007, Jeffrey James of Ibla Times wrote:

“To put a real exclamation point on the evening, the Italian piano duo of Francesco and Vincenzo De Stefano closed the festivities with a performance of the four-hands arrangement of Stravinsky’s The Rite of Spring. You can’t lose with the Rite. The DeStefano’s made very good use of space and texture in their playing, a nice dynamic sense, and seemed in complete control of this profoundly knotty score. Very, very good work, and a flashy way to end the concert..”

De Stefano Piano Duo is a twins brother born in Reggio Calabria on 26 January 1986. At 9 years old take their first recital in public. At Just 15 years old they graduate with the highest praise and mention of honour at the Conservatory of Vibo Valentia under the guidance of Paolo Pollice. They studied at the International Academy "Incontri con il Maestro" di Imola where they received the Diploma “Master”.

They released a DVD that testifies the prize won at the 2008 Perrenoud Foundation International Competition in Wien with their acclaimed interpretations of Stravinsky's Le Sacre du Printemps and Reminiscences de Don Juan of Liszt. Also, they have recorded a CD for "Suonare Records", the label of the leading musical newspaper in Italy Suonare News. Sky Classica satellite television Channel have realized recently a documentary video for their young and brilliant career. Ceska Televize made a reportage of their last concert debut in Brno, Czech Republic.

Recently they are playing with piano duo Olga and Natalia Tatievskaya, Russian twins sisters, the repertoire for 2pianos  8hands. Their repertoire ranges from the Baroque period until the contemporary time, playing compositions of composers like Chick Korea. They are teaching both in Conservatory: Francesco is Piano Professor at Conservatory “Duni” in Matera and Vincenzo in Conservatory “Cimarosa” in Avellino.

Francesco & Vincenzo De Stefano (1986) are being awarded in over 100 national and international competitions in both solo and duo and are winners of major competitions for piano duo:

-2005 Best Piano Duo of the Mozarteum Academy in Salzburg