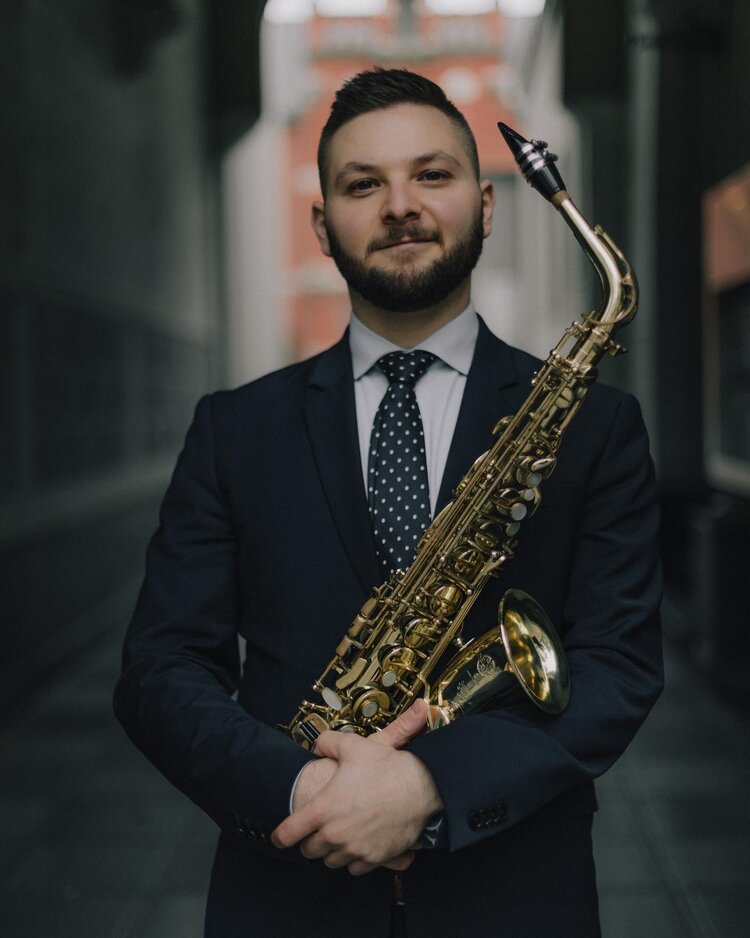 An ardent supporter and advocate of contemporary and modern music, Don-Paul has been involved in the creation and performance of over 100 new works for saxophone by some of the most talented and award-winning young composers of the time. Recently commissioned composers include Max Grafe, David Biedenbender, Nicolas Tzortzis, María Eugenia Luc, Gregory Wanamaker, Simone Movio, Chris Dench, Julien Malaussena, among many others.

As an avid and in-demand chamber musician, Don-Paul is active with the international interdisciplinary saxophone quartet,Ensemble du Bout du Monde (EBM), his duo with clarinetist, Jackie Glazier, Duo Entre-Nous (D2), and with a newly formed Belgian based reed quintet.

EBM regularly performs in major concert venues throughout Europe and Switzerland. Their upcoming seasons will include performances in Belgium, Switzerland, and the United States. Invited to major European concert venues and festivals, the quartet has gained international renown for their sensitivity, bold programming, and distinct entrepreneurship. In the Spring of 2021, EBM will hold an Israeli tour, performing at major festivals throughout the country. In Fall 2021, they will travel to the US as guest artists for a major festival organized by the New England Conservatory.

Duo Entre-Nous is active throughout the United States giving concerts and masterclasses at major Universities there. In Europe, they are invited to perform at festivals and conferences. They were invited guests at the prestigious Musica Nova festival in Kansas-City, Missouri in November 2019 and will be the headlining performance for the upcoming Kuraia Festival in 2020-2021. Previously, they gave the premiere of Scott McAllister's "Concerto Americana" in September 2015 with the University of Florida Wind Symphony and David Waybright conducting. In June 2017 they professionally recorded Gregory Wanamaker’s “Ragahoro Breakdown” for a new CD which was released April 2018 through PARMA Recordings - Navona Records Label.  The duo has been recording new works by international composers for their upcoming album release, set to be released in Spring 2021.

Don-Paul was a prizewinner at the prestigious 4th Jean-Marie Londeix International Saxophone Competition in Bangkok, Thailand. Recently, EBM won the third and special prizes at the International Chamber Music Competition in Illzach, France. In 2017, they garnered first and special prizes at the Concours d'Interprétation de la Ville de Boulogne-Billancourt. Don-Paul was also awarded the Harriett Hale Woolley Scholarship for academic study in Paris, France for the 2013-2014 year. Other awards include prizewinner in the 2013 Marco Fiorindo Chamber Music Competition, University of Florida Concerto Competition, and the Susquehanna University Concerto Competition, along with several others.

Don-Paul is an avid clinician and gives masterclasses throughout Europe and the United States. Currently, he serves on the faculty at the Susquehanna University High School Wind Ensemble Institute in Selinsgrove, Pennsylvania. He also holds the position of the saxophone chair in the Ocala Symphony Orchestra in Ocala, Florida. Previously, he has served on the adjunct faculty at the College of Central Florida in Ocala, Florida where he taught applied to study in both saxophone and clarinet.

Currently, Don-Paul is living and working as a freelance saxophonist based both in Belgium and the United States. He is also a doctoral candidate for the Ph.D. in Artistic Research in collaboration with Leiden University (NL) and the Orpheus Institute (BE).