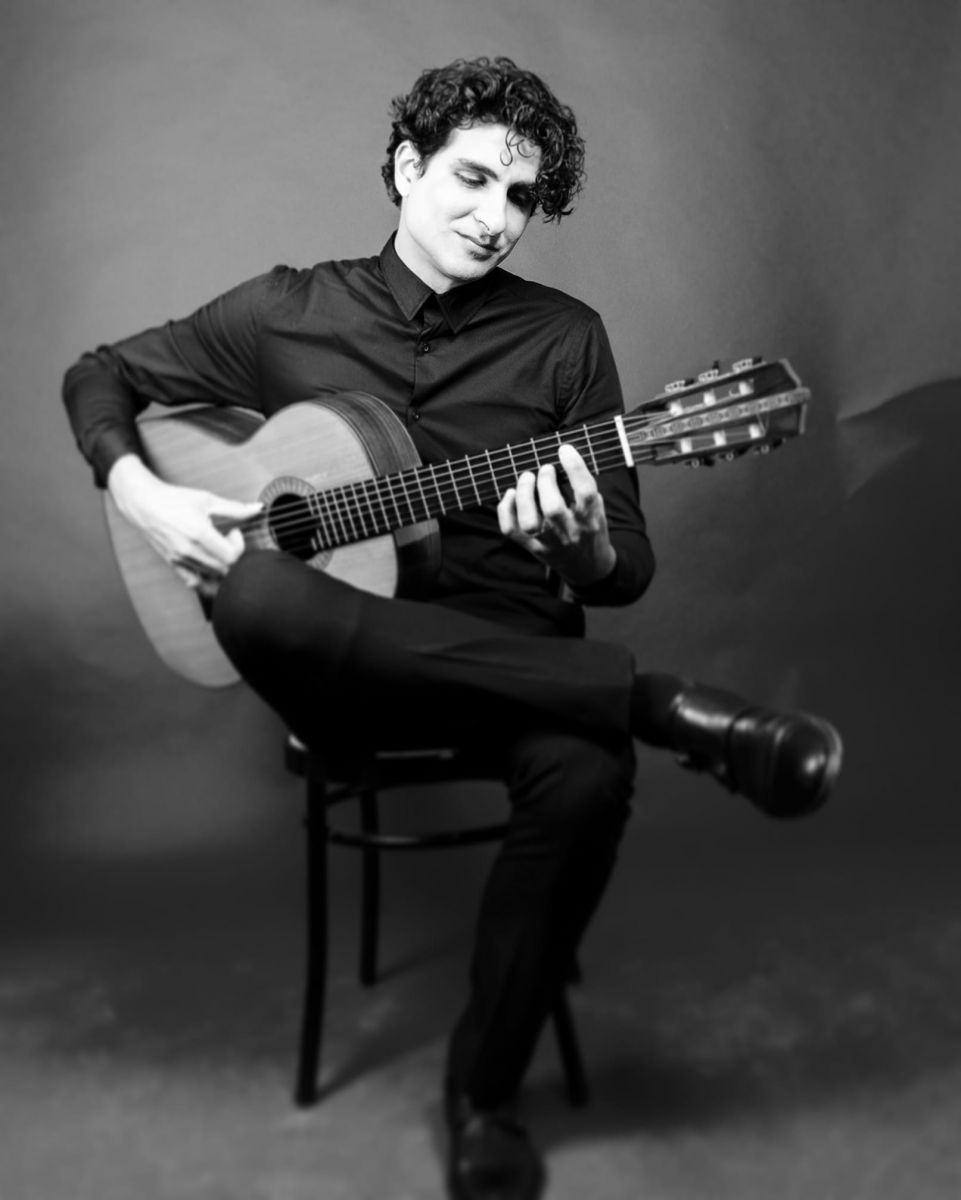 He began his career studying guitar and jazz composition with the maestro Lutte Berg. He soon began to carry out, in parallel with his study, a concert activity in the fields of jazz, rock, blues. Get in touch with the world of classical music by studying Renaissance and Baroque lute at the Conservatory of Music in Cosenza under the guidance of Maestro Ugo Di Giovanni, collaborating with various baroque ensembles and orchestras such as the Ensemble of Ancient Music of the Conservatory of Cosenza, the ensemble "Riflesso Armonico", carrying out a continuist activity, and with them a concert activity throughout Italy and winning several international competitions in the sector.

At the same time, he deepens the study of ethnic music, voice, composition and arrangement, approaching the study of instruments such as the Arabic oud, the Irish bouzuki, the percussion, the guitar-harp, the ocarina and the recorder, mandolin, drums, bass. , keyboards, classical, acoustic, electric and fretless guitar. He participates in various record productions as a musician, arranger, composer and singer, and carries out an intense concert activity both as a session player for artists between northern and southern Italy, such as Massimo Ferrante, Ennio Rega, and many others, both in formations directed by him. He collaborates with various theater companies, such as Tolda 86 ', taking care of composing and arranging the music, performing in the main Calabrian theaters, the Rendano Theater, the Morelli Theater, the Piccolo di Castiglione, the Franz Theater, and others. At the same time he takes care of music teaching at various private Calabrian and Lombard institutes and academies. Subsequently he studies Jazz at the civic school of Milan, and begins the collaboration with Antonello Gabelli, together with whom he constitutes the new official formation of the Corvi as a singer, guitarist, composer and arranger, making several tours throughout Italy. He continues his studies at the conservatory, in classical guitar and composition.

He forms several ensembles including 'Aria' with the opera singers Franco Ruggero Pino and Teresa Musacchio and Katia Mancuso at the viola da gamba with whom they perform concerts in the main Calabrian theaters. In the meantime he won several international competitions as a guitarist, and as a composer.

He begins a stable collaboration with M. Giulio Tampini with whom he plays several concerts in guitar duo, forming together the 'Duosfera' performing in important festivals and reviews throughout Italy, such as "Un Paese a Sei Corde" in Borgomanero, Sala Consiliare of Brescia, Der Mast Theater of Brescia, Festival of Serina-BG, of Bernareggio -Monza Brianza and several others.

In 2019 DUOSFERA recorded their first album for the Swiss label Movimento Classical.

First prize at the prestigious "Egidio Carella" International Composition Competition - Sect. "Call for Scores". With the piece for solo guitar "Compas", receiving great appreciation from the president of the jury Fabio Vacchi, one of the greatest composers of our time, he receives for the same composition the appreciation of the well-known Brazilian composer guitarist Sergio Assad.

Performs the concert preview of the song "Compas", at the Auditorium of the Piacenza Conservatory; the same piece is included in the concert repertoire by Nicola Montella, an Italian virtuoso appreciated throughout Europe, with a first performance of the piece at the Franz Theater in Cosenza.

He performs several transcriptions for guitar and more, transcribes the concert for guitar and orchestra n.1 op. 99 by M.Castelnuovo Tedesco for two guitars for the duo Tampalini-Saggese, and for the same duo he transcribes the song "Allegro Barbaro" by Bela Bartok for two guitars, the pieces will be performed in world premiere in Pordenone in May 2019, continuing with other performances on prestigious occasions such as the 'Gran Galà della chitarra' in Milan, at the Italian Guitar Campus in Trevi, other festivals in Italy and also abroad such as the 'Gliwice International Guitar Festival 2019'.

In 2020 he takes part in the Rai Radio 3 program by participating in the Mediterranean Festival, as Duosfera in duo with Giulio Tampalini, where they will perform songs composed by Daniele Fabio live on Rai Nazionale.

In 2020 he signed the soundtrack of the documentary dedicated to Calabrian community of Camini and the Jungi- humanitarian cooperative Mundu.

Composer of the soundtrack of the commercial of the AnimaMundiPerfume collection, a line of fragrances that won the Fi-Fi Award Russia 2019 as Best Niche Collection.

He composes the song "The Edge of The Moon" for the guitarist Vietnamese Thu Le, which he inserts in his own repertoire and brings in tours all over the world, with a first performance for the USA at the Minesota Guitar Society in 2021.

In 2021 his piece for piano solo "Segnali" was performed and included in the concert repertoire by Giusy Caruso, pianist and performer of the SIMC (Italian society of contemporary music) and research artist in Belgium (Conservatory of Antwerp, IPEM Ghent University, Laboratoire de Musicologie-University of Brussels).

Also in 2021 the same song "Segnali" is performed and recorded

In a version for piano and drums, with Giuseppe Cacciola on drums, first percussionist at the Teatro la Scala in Milan, world famous drummer and percussionist.

With Giuseppe Cacciola himself, execution and recording of the piece “Sons of the same land”, as guitarist and composer.

In 2021 he held concerts for the Indonesian Embassy and was invited for this occasion by the Calabria Region to represent a Calabrian excellence.

In 2021 the scores of several of his songs are published for solo guitar for Berben-Curci Edizioni.

In 2021 he recorded and released his second solo album, "Istantanee", for the Movimento Classical label with Fuori Rotta editions. The disc contains original songs, songs from the classical repertoire for guitar, and original arrangements of jazz standards and rock songs.

He receives various commissions as a composer both for solo guitar and for orchestra, such as from the Calabrian orchestras directed by Maestro Sarino Froio, or from the Ferrara plectrum orchestra "Gino Neri".

2021 collaborates with the BA17 theater company, writing and interpreting the soundtracks for the show "Love that moves the sun", on the occasion of Dante's 700th anniversary, with many performances in various theaters.

He carries out various masterclasses and advanced courses as a teacher of guitar, composition, improvisation and arrangement, with students from all over Italy and abroad

He is Endorser Leader of the SalvadorCortez guitars and LaBella corde brands.