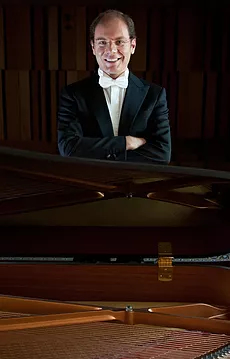 António Oliveira was born in Porto and started his musical studies at the Music Academy of Vilar do Paraíso. He obtained a bachelor's degree in the class of Prof. Sofia Lourenço at the School of Music and Performing Arts of Porto. Under the Socrates / Erasmus program, he studied at the Hochschule der Kunst in Berlin in the class of Prof. Laszlo Simon. He continued his training at The Hartt School, University of Hartford, Connecticut, USA, where he obtained the diploma "Master of Music" in the class of Prof. Luiz de Moura Castro.

He complimented his studies with Helena Sá and Costa, Pedro Burmester, Mikail Pethukov, Carla Giudici, and Emanuel Ax. He received an Honorable Mention in the Maria Campina Contest and was a finalist in the “Emerson String Quartet Competition” Contest.

Returned to Portugal, he enters the Conservatory of Music of Porto where he is Professor of Piano. He was a pianist at the Opera Studio of Casa da Música do Porto.

He has performed solo and chamber music recitals in some of the most important venues in the country and abroad. He played at the Estoril Music Festival, Foz do Cavado Festival, Autumn Festivals in Aveiro, Raízes Ibéricas Festival, Cistermúsica Festival in Alcobaça, Coimbra Music Festival, Palácio da Bolsa Music Festival, Porto Piano Encounters, in Reading farms at the Campo Alegre Theater, ClarinetFest2007 in Vancouver, Canada, Musiquem Lleida 2007 in Spain, ClarinetFest2008 in Kansas City, United States of America, and ClarinetFest 2009 at Casa da Música do Porto. He recorded for RTP and RDP Antena2.

He played with internationally renowned artists such as the oboist Kevin Vigneau and the clarinetist Darko Brlek. He maintains a close collaboration with the clarinetist António Rosa, with whom he recorded two CDs of 21st Century Portuguese Music. This duo, Project XXI, received the prize for best chamber music group at the Festival Musizam Lleida 2007. Recently formed PORTriO with clarinetist Filipe Pereira and violist Hugo Diogo, having edited their first CD in October 2013.

He was a judge at CIMCA 2011 “International Chamber Music Competition“ Cidade de Alcobaça” ”and at the Calouste Gulbenkian Braga Conservatory Competition 2010 and 2013.

He premiered and recorded with the soprano Ana Barros the works Cicuta and Sept Épigrammes de Platon by the composer António Chagas Rosa.

Made the world premiere of the 1st Piano and Orchestra Concert by the composer Telmo Marques.

He recorded for RTP the 2nd Concert for Piano and Orchestra by S. Rachmaninoff as a guest of the program “Música Maestro” presented by conductor Rui Massena.

He was an Advisor to the Programmer, Maestro Rui Massena, from Guimarães 2012 European Capital of Culture.