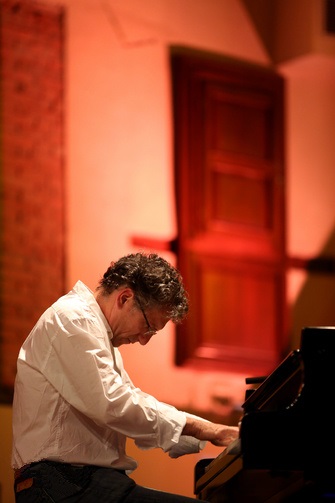 Antonio Flinta, pianist, composer and educator born in Chile, as a child lived in Peru, Italy and Spain, and at 14 started to play piano influenced by the musical environment of his mother’s family in Madrid. At 17 he started studying physics at university, but soon after realized that music was his calling.

He studied in Madrid at the Taller de Músicos with Joshua Edelman, and attended masterclasses with Barry Harris, Bob Moses and Chuck Israels, among others. With a homemade piano solo tape recording of  “All Blues” and “My Funny Valentine,” he won a scholarship to the Berklee College of Music in Boston, Mass., where he studied composition and arrangement, improvisation with Ed Tomassi and jazz piano with Ray Santisi. In Rome in 1993, after playing in various bands, he formed his own trio with Roberto Bucci on bass and Claudio Gioannini on drums, starting a musical relationship and a friendship that lasts for more than twenty years.

Focusing on original compositions and interplay, the trio recorded four CDs: “The Meeting” (2000), “Tree andFigure” (2003), “La Edad De La Ira” (2005), and “Portraits and Songs” (2007), and toured both national and international jazz festivals. The song “Ninietta” included in the album “La Edad De La Ira” was a finalist in the 2006 USA Songwriting Competition.

In 2008 the trio expanded its expressive possibilities becoming a quartet with the contribution of longtime friend tenor saxophonist Piercarlo Salvia. The quartet toured four continents, gained wide recognition and recorded two celebrated CDs: “Tamed” (2009) and “Art is an Insurgent Poem” (2013).

In 2018 a new quartet takes off with tenor and soprano sax Luciano Orologi, and international tours (Ukraine, Finland, Russia, Germany, Austria) bring about our album “Cycles and Rhymes” (2019).

The Antonio Flinta Trio and Quartet has toured jazz festivals, theatres and jazz clubs all over the world, from China to Guatemala, from Finland to Morocco, always performing its own music: original compositions and an intense interplay are the means to explore moods, colours, textures and space, through driving rhythmic grooves or intimate ballads, through mantra-like vamps or free form songs, always bearing in mind that music – universal language – must communicate.