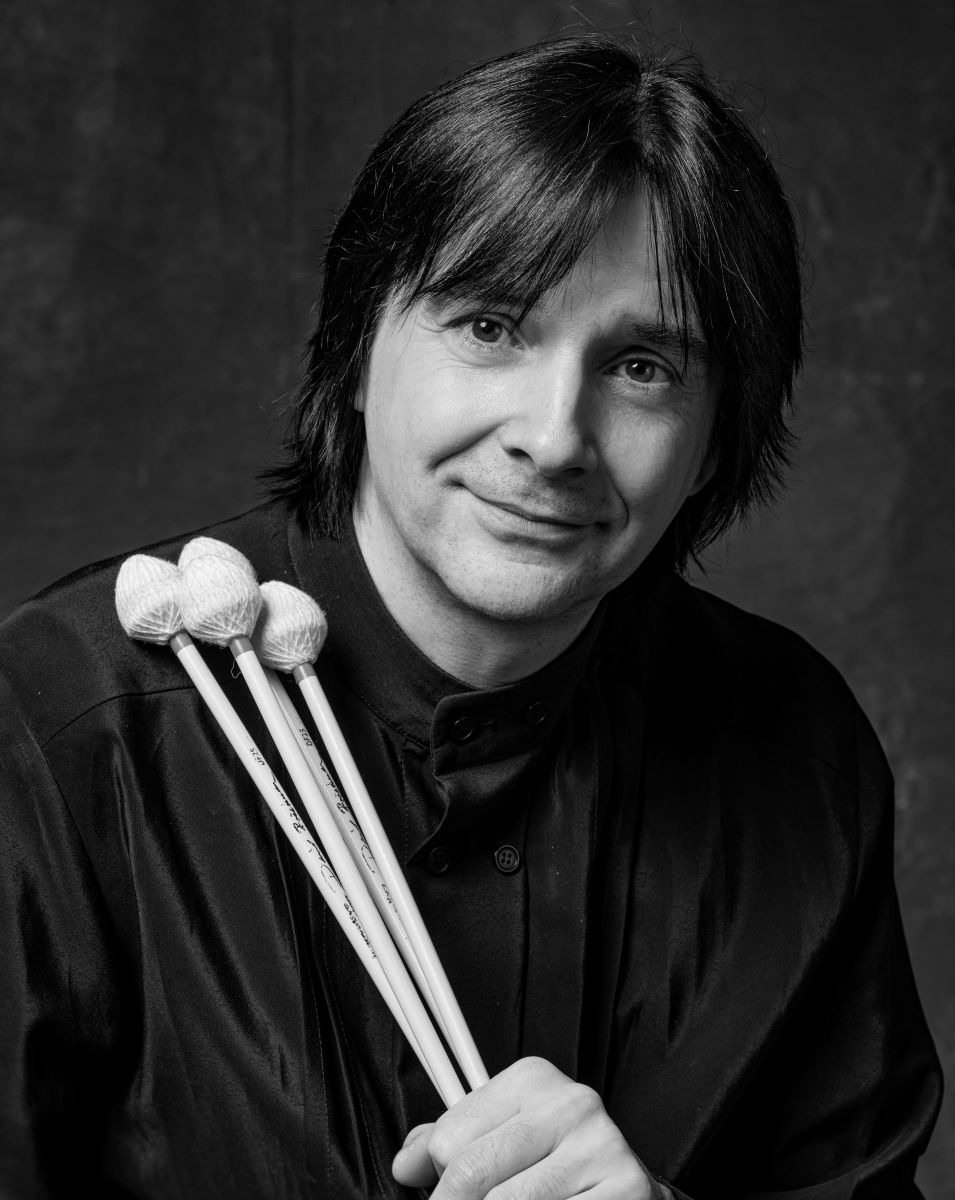 Andrei Pushkarev was born in a family of musicians in Kyiv in 1974. At the age of five, he began his musical education with piano lessons. In 1980 he entered the Kyiv Specialized School of Music.

From young age Andrei delighted in music and by the age of 14, his concentration shifted to percussion instruments.

During his studies at the Conservatory, Andrei began to create his works including his compositions for vibraphone solo. Andrei continued to study orchestral percussion but the vibraphone had captured his soul.  The vibraphone became much more than a favorite instrument to Andrei. The vibraphone, a true solo instrument, was capable of transporting listeners to a world filled with new thrilling sounds and colors

In 1995, the newly established “New Names of Ukraine” competition awarded Andrei First Prize as a solo vibraphonist.  Andrei performed his musical compositions at the award ceremony.

Between 1995 -1999 Andrei performed as a solo vibraphonist with many chamber ensembles all around Ukraine.

During this time, Andrei has reached another major milestone in his career. In 1996, he was selected to become the principal timpanist for the Kyiv Philharmonic Orchestra. At the age of 22, he became the youngest principal timpanist of the symphonic orchestra in Ukraine.

In 1999 his musical career escalated to a new level. Andrei Pushkarev joined Kremerata Baltica Chamber Orchestra. Until today he holds the status of a well-recognized soloist as well as a principal percussionist of this ensemble.

World-famous violinist Gidon Kremer created the orchestra in 1997. Since 1999, Andrei has been touring with Kremerata Baltica around the world, participating in countless concerts. Additionally, he participated in numerous recordings as a member of the ensemble on labels such as Nonesuch, and Deutsche Grammophon.ECM etc. As a soloist, he can be heard on the CD release “After Mozart” which received a Grammy Award in 2001 in the U.S. as well as the Echo Award in 2002 in Germany.

In the summer of 1999, he performed for the first time at the Kammermusikfest Lockenhaus (Austria) and soon became a regular participant at this festival.

In the following years, Pushkarev performed many compositions as a solo vibraphonist at the Kammermusikfest Lockenhaus – along with arrangements of Astor Piazzolla, Richard Rogers, Peter Tchaikovsky, etc.

Since then he has made many arrangements for the vibraphone and violin solo with and without chamber orchestra. Together with Gidon Kremer and Kremerata Baltica he performed in numerous concert halls all around the world, including Carnegie Hall in New York, Albert Hall in London, the Musikverein, and Konzerthaus in Vienna, Concertgebouw in Amsterdam, Elbphilharmonie in Hamburg, etc.

Gidon Kremer proposed the idea of making jazz arrangements using 15 two-voice inventions by J. S. Bach for solo vibraphone. Andrei developed the idea, having a great passion for jazz. Eventually, each of the famous Bach’s inventions was reshaped and executed in the style of a variety of jazz pianists - including Oscar Peterson, Dave Brubeck, Chick Corea, etc. In spring 2004, Andrei Pushkarev performed the project “Bach Vibrations” for the first time in Basel (Switzerland) at the Gidon Kremer’s ”Les Musiques” festival.

The same year he recorded the cycle. This CD, released by the Austrian “Gramola” label was recently mentioned by the Deutsche Schallplattenkritik Bestenliste, as one of the discoveries of the year.

In the summer of 2005, Andrei presented the “Bach Vibrations” project as a solo recital at the Verbier Music Festival (Switzerland).

“It is in no way a ‘crossover’ project. Andrei Pushkarev and his vibrations are extraordinary – he is more than a good musician – rather a magician. Andrei is not only INSPIRED by great jazz pianists – he is inspiring everything he touches himself.”

In 2004, he was awarded the solo vibraphonist prize from the “Pro Europe” foundation.

In 2005 Andrei did a world duo tour with Gidon Kremer. After their duo concert in Wigmore Hall, London, The Independent wrote:

“…Pushkarev, in a delightfully modest manner (masking a ferocious technique), brought jazz, smoke, and swing both tastefully and deeply musically to Bach.”

In 2006, Andrei Pushkarev toured with Gidon Kremer and Lithuanian pianist, Andrius Zlabys, as part of Kremer’s trio project, “From Bach to Piazzolla.” This project garnered huge accolades in the United States of America and South America. Here are some American reviews:

“Vibe-man Pushkarev nearly stole the show with his arrangement of Bach’s two-part inventions, in the styles of three great jazz pianists: Bill Evans, Oscar Peterson, and Dave Brubeck. He plays with such a mix of brilliant technique and obvious delight — you want to hear more from this young man.”

“Then the astounding, musically multilingual Ukrainian vibraphonist Andrei Pushkarev delivered his impressions of three Bach inventions in the styles of jazz pianists Bill Evans, Oscar Peterson, and Dave Brubeck. He caught both Evans' dreamy impressionism and underrated ability to swing, though Peterson's agile voice was less in evidence and the Brubeck homage was dominated by the playful 5/4-meter vamp of, what else, "Take Five."

In 2010, together with Gidon Kremer and Argentinean bandoneonist Dino Saluzzi, Andrei recorded “Themes from the Songbook” – music from cinema and theater by Georgian composer Giya Kancheli. In October 2010 this CD was released by ECM Records.

Since 2013 Andrei Pushkarev has been an endorser and the official performer of Majestic Percussion™ and Innovative Percussion™.

In  November 2017, the Latvian National Opera staged the ballet "Don Juan" with music by Mozart and Chopin arranged by Andrei Pushkarev.

In  March 2020, National Theatre Brno (Czech Republic) staged the ballet "The Lady of the Camellias" with music by Schubert arranged by Andrei Pushkarev.

In June 2020 together with percussionist Pavel Beliaev founded the percussion duo GRAD.

In 2020, together with violoncellist Julius Berger and Pavel Beliaev recorded “Bach Frequencies 60-90” – music by J. S. Bach, Alessandro Marcello, Dmitri Schostakovich, and Astor Piazzolla arranged by Andrei Pushkarev and Julius Berger for violoncello piccolo, vibraphone, and marimba. In April 2021 this CD was released by Solo Musica.

Meanwhile, Andrei works on many arrangements for orchestras and different chamber squads featuring world-famous musicians. Furthermore, he creates his works.

1995 – is awarded First Prize as a solo vibraphonist in the newly established competition “New Names of Ukraine”, at which also performed his musical compositions

1995 – 1999 performs as a solo vibraphonist with many chamber ensembles in Ukraine, playing his works and arrangements

1996 – got the main timpanist position in the Kyiv Philharmonic Orchestra

1999 – joined Kremerata Baltica chamber orchestra (artistic leader Gidon Kremer), still maintains solo-vibraphone and principal percussion positions. He had participated in concerts around the world. He as well had participated in numerous recordings as a member of the ensemble on labels such as Nonesuch, and Deutsche Grammophon.ECM etc. As a soloist, he can be heard on the CD release “After Mozart” where performs his timpani cadenza. In 2001 this CD received a Grammy Award in the U.S. and as well the Echo Award in Germany in 2002

2004 – recorded his own-composed cycle “Bach Vibrations” – improvisations on 15 two-part inventions by J. S. Bach for vibraphone solo. This CD, released by the Austrian label “Gramola”, was recently mentioned by the Deutsche Schallplattenkritik Bestenliste as one of the discoveries of the year. The cycle was published by Norsk Musikverlag

2006 – as a part of Gidon Kremer’s trio project “From Bach to Piazzolla” toured together with a Lithuanian pianist Andrius Zlabys in Europe, South America, the USA, and Canada performing his compositions and arrangements

2010 – together with Gidon Kremer and Argentinean bandoneonist Dino Saluzzi recorded “Themes from the Songbook” – music from cinema and theater by Georgian composer Giya Kancheli with arrangements by Dino Saluzzi and Andrei Pushkarev. In October 2010 this CD was released by ECM Records

2014 – arranged Piano Quintet Op.18 by Mieczyslaw Weinberg for piano, strings, and percussion in collaboration with Gidon Kremer. Published by Peermusic

2017 – wrote the ballet “Don Juan” in two acts, arranging music by W. A. Mozart and Frederic Chopin for Latvian National Opera and Ballet; in collaboration with dramaturge Valentina Turcu and choreographer Julio Arozarena

2018 – created duo-project “Tango for Cello and Vibraphone” in collaboration with cellist Tatjana Reiko. The concert program includes both original compositions and arrangements of pieces by Astor Piazzolla, Hector Varela, and other tango masters. The world premiere took place in Latvia

2020 – wrote the ballet “The Lady of the Camellias” in one act, arranging music by Franz Schubert for National Theatre Brno in collaboration with dramaturge Valentina Turcu

2021 – arranged “33 Miniatures from music for film and theatre” by Giya Kancheli for vibraphone solo. Published by Kancheli Music