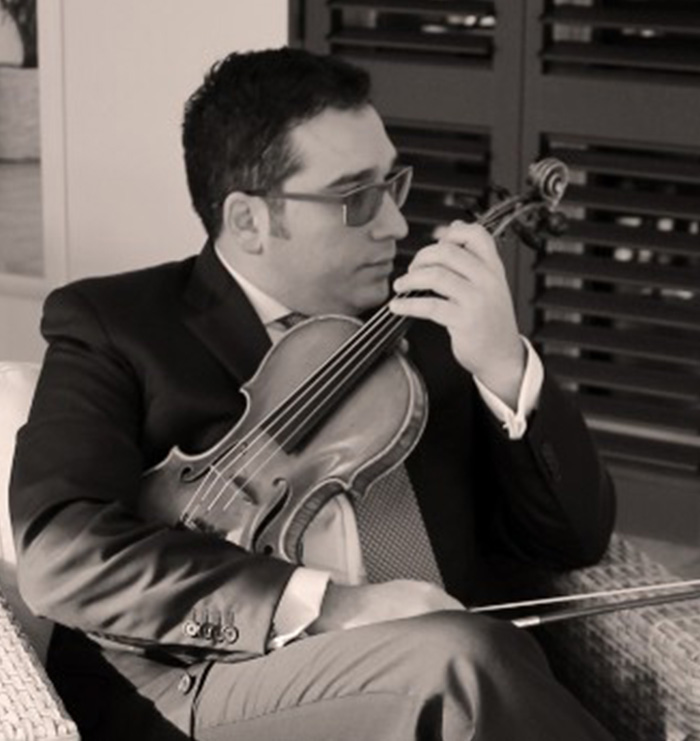 Andrea Castagna, brilliantly graduated with 10, Laude and ministerial mention with M°Antonio Anselmi and, subsequently, he obtained, first in Italy, the II level Academic Diploma in Musical Disciplines - Violin disciplinary sector - with a grade of 110 and honors, discussing a thesis on Nathan Milstein.

He attended prestigious masterclasses with the violinists Massino Quarta, Felix Ayo, and Maestro Alessandro Milani, Concertmaster of the Rai National Symphony Orchestra of Turin. He subsequently continued his specialization in Vienna with Maestro Jan Pospichal, concertmaster of the Wiener-Symphoniker.

He played with the RAI Symphony Orchestra of Turin, with the Archi Della Scala Ensemble and the Santa Cecilia Orchestra of Rome, Abruzzo Symphony Orchestra under the direction of Fedoseev, Tate, Arming, Pappano, Judd, Bufalini, Windfuhr, Piovano, He was the first violin of the Viotti Chamber Orchestra, conducted by Maestro Franco Mezzena, with whom he also played as a soloist.

In December 2009, again with this lineup, he performed in the prestigious review "I Concerti del Quirinale", broadcast live on RadioRai3, with Franco Mezzena and Roberto Prosseda as soloists. The CD on the "Quattro seasons” by Vivaldi from Wide Classique in which, in addition to being a shoulder violin, he is a soloist with Maestro Mezzena in the concert of two violins in A minor by Vivaldi (Wide Classique).

He records for the Wide Classique record company with which he has already made a CD dedicated to Haydn's violin concertos, as a soloist together with the Interamnia Ensemble Orchestra. The recording was reviewed with four stars by the magazine "Musica" in the July-August 2012 edition and, subsequently, found an excellent review in the "SUONO" magazine of October 2013. The first of 5 volumes of Viotti's Duets with the violinist Grazia Raimondi was recently published.

In April 2016, the first volume of the complete sonatas by W.A. Mozart was published for Pf and Vl. with the pianist Lorenzo Bavaj. This production also received unanimous critical acclaim and, in October 2017, received four stars from Musica magazine. In 2019 the second volume of the sonatas was published.

He plays with the Quartetto Petite opera ensemble and the tenor Josè Carreras with whom he has played tournaments in France, Ireland, Switzerland, Luxembourg, Austria, and the United Arab Emirates.

He was awarded the “Annino Di Giacinto” award from the city of Teramo for having contributed to the spread of the cultural values of the city and the region in the world.

Since 2015 he has been a permanent member of the historic Trio Di Pesaro.

He is the holder of the ensemble music discipline for string quartett at the "G. Braga Di Teramo" Conservatory.

He plays Marino Capicchioni since 1938. In September 2020 he was appointed by the municipality of Teramo to represent the board of the Historic Society of music and theater "Primo Riccitelli".