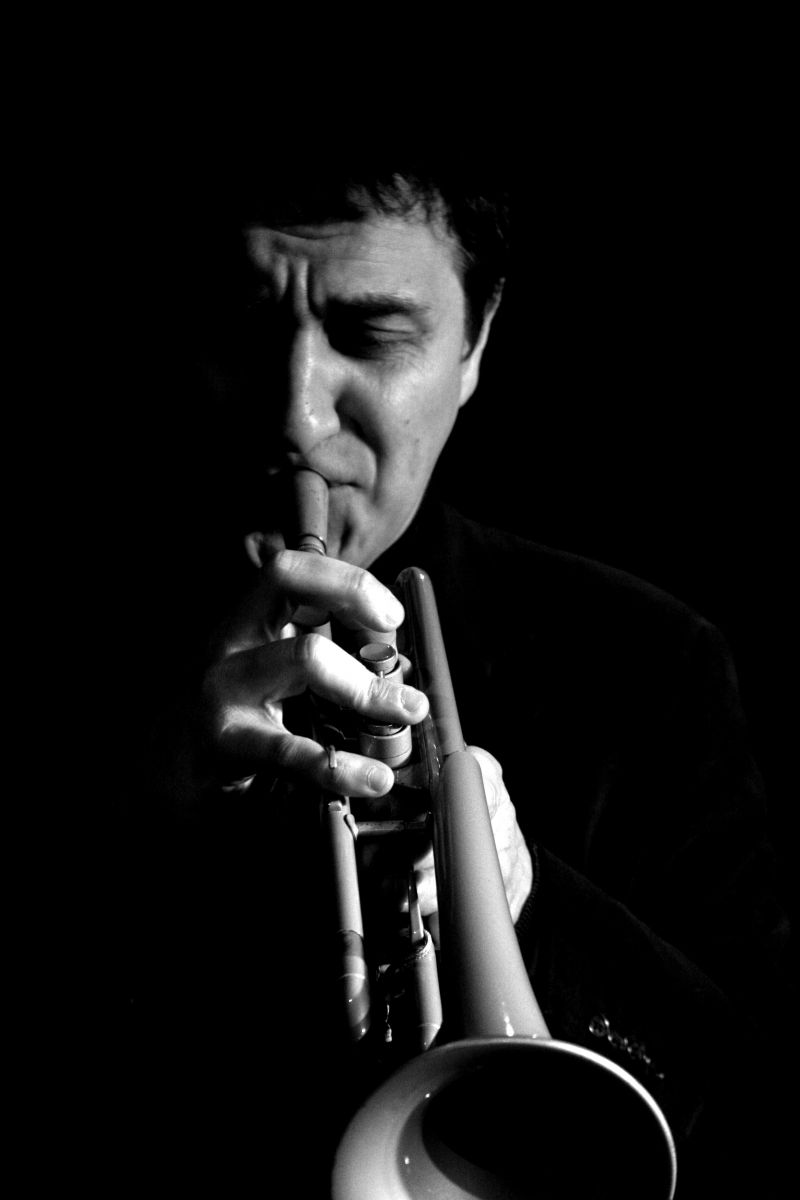 Alberto Mandarini is a professor of Jazz Trumpet at the Conservatorio G. Verdi in Milan and began his musical career at a very young age, playing with numerous Italian symphony orchestras (RAI Symphony Orchestra of Turin, "Orchestra Internazionale d'Italia", "I Filarmonici di Torino") and with various brass ensembles. He immediately approached jazz, collaborating with traditional formations (Rigomagus Jazz Band) as well as with some of the most important Italian musicians of the creative area.

From 1995 to 2004 he was part of the orchestra of the singer-songwriter Paolo Conte participating in several world tours. In the same period, created the "Phoebus Ensemble", a small orchestra operating in a musical field that ranges from renaissance music to avant-garde jazz and which received considerable recognition from the national and international press. From 1997 to 2008 he has been Artistic Director of the "CVM Big Band" and the "Hasta Big Band".

From 1999 to 2008 has been a teacher of Trumpet and Orchestral Exercises at the "Incontri Internazionali Di Musica Cluster" and in 2000 he has been Finalist with the mention of merit in Paris at the European audition for the "Orchestre Nazionale de Jazz" of France.

In 2001 formed his own quartet with Umberto Petrin, Giovanni Maier and U. T. Gandhi and held trumpet and ensemble music courses at the "3° Seminario de Jazz y Flamenco" in Seville and at the "Corsi di alto perfezionamento ad indirizzo jazzistico" at Villa Gomes in Lecco. In 2002 he was invited to join the "Rara Jazz Quartet", with Andrea Dulbecco, Roberto Bonati, and Roberto Dani, who has played in Italy, Mexico, and South Africa.

Alberto is also very active in the field of composition, arrangement, and conducting. His main goal is to make his musical experiences coexist in a unique style. From this research were born several projects including "RotaAzione" (Ballet on the music of Nino Rota for chamber orchestra), "Love Song", Metamorphosis, Homage to Walt Disney, and others. Since 2004  has been in charge of the arrangements and conducting for the Christmas concerts of the Cassa di Risparmio di Asti. 2 Also, in 2004  composed the music for the short film "Nanà" by Giuseppe Varlotta which was awarded in Venice in 2005 as the best film at the "Cinecittà Holding 2005" festival.

Alberto also published for the publishing house ANIMANDO, some methods for trumpet and trombone together with an original composition for a small jazz orchestra. In 2005  created the project "Love Song": a journey through the Italian songwriting of the '900 for Jazz Quintet and String Orchestra with guest Gianluigi Trovesi. In 2006, with Umberto Petrin and Stefano Profeta realized "Tribute to Chet" dedicated to Chet Baker and, with Daniele Tione formed a duo, still active, with which proposes mainly original music and a tribute to Louis Armstrong. In the same year, in addition to publishing an article on Clifford Brown in the magazine Jazzit, he was in charge of the artistic direction for the music section of the publishing house "Scritturapura". In 2007  collaborated as a soloist with the orchestra Flight big band of Biagio Coppa. In 2008 and 2009, the municipality of Asti arranged and directed the music of the concert entitled "La Carica Dei 1000 e..." for a choir of more than 1000 children accompanied by the Classical Orchestra of Alessandria. Also in 2008  founded with Daniele Tione, Dino Contenti, and Gigi Biolcati the "Quartetto Belcanto" with which revisits the arias from '600 to '900 in a jazz key. In 2009, for "asti Teatro 31" he realized the work in the national premiere "Metamorfosi".

In 2010, the exhibition "Good Afternoon Peggy" linked to the exhibition of paintings on abstractionism organized by "ARCA" of Vercelli in collaboration with the Guggenheim Museum in New York, has created the world premiere of "Abstract Mutations" for speaker, Jazz Sextet and Symphony Orchestra. As a soloist, he was invited to the television program "Via con me" broadcast on Rai3 and conducted by Fabio Fazio and Roberto Saviano. In 2011, with Mauro Grossi, Stefano Dall'Ora and Marco Castiglioni founded the 4tune Quartet which inaugurated the Chiasso Jazz Festival. Alberto also has been invited, as guest soloist, with Corrado Guarino's quartet, to participate in the realization of two books + CD by Roberto Piumini and Claudio Comini "I Giochi di Miles" and "Il soffio di Satchmo" for the series Le Fiabe in Jazz published by Edizioni Curci.

In 2012, for the Enten Eller quartet, he made the arrangements for string orchestra and jazz octet, for the staging of the show E(X)STINZIONE commissioned by the Open Jazz Festival in Ivrea.

Alberto created and directed the adaptations for symphonic orchestra and children's choir for the show "La testa del Chiodo" on texts by Gianni Rodari and music by Antonio Virgilio Savona commissioned by the Bartolomeo Bruni Orchestra of Cuneo. In 2014 in 2015 and 2020 he was invited to the radio program "Piazza Verdi" broadcast on Rai radio3.

In 2015 he realized the show "BOOM!" on texts by Massimo Cotto for the Bank of Asti. In 2015 and 2016 he realized the show "Ciak si suona" in collaboration with the Fabbrica dei suoni of Venasca (CN). In 2016  formed the quartet A Kind Of Miles with Enrico Merlin, Dino Cerruti, and Rodolfo Cervetto and was invited to direct the Novara Jazz Collective. He also realized the show "Il Rock" for Symphonic orchestra. In 2017 he edited the music for the theatrical show "Io Nel Pensier Mi Fingo" realized for the season of Alfieri Theatre in Asti in collaboration with FAB. As a soloist, he collaborated with the Verdi Jazz Orchestra directed by Pino Jodice on the occasion of the tribute to Miles Davis. In 2018 he has been part, as a soloist, of two projects of the "Area M Orchestra", directed respectively by Corrado Guarino and Oscar Del Barba.

Also in 2018, directed the "National Jazz Orchestra" composed by the best young talents of Italian conservatories with guest John Surman. In 2019 he realized the show "Partenze e Ripartenze" and founded the sextet Mach 6 with which, in 2020 he released the Cd Take Off. 3